A Thriller of the Mind 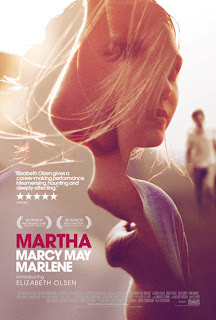 This tremendous film from the American independent sector is a double debut, the first outing by director and writer Sean Durkin, and the first screen performance by Elizabeth Olsen, the younger sibling of the vacuous Olsen twins. But there is nothing in the least vacuous about her stunning performance as the enigmatic, vulnerable and damaged Martha, one of life’s natural victims. She conveys so much not by talking but simply by looking.

The premise of Martha Marcy May Marlene is good but it is Olsen’s controlled and understated acting that gives this psychological thriller a special resonance, making the whole thing quite haunting. She impressed me as much as Jennifer Lawrence did in Winter’s Bone, another intelligent movie from the indie sector that I saw in 2010. The parallels here were all the more exact in that John Hawkes appears in both.

In Martha Marcy May Marlene he plays Patrick, a sinister and manipulative Charles Manson-type figure heading a sinister and manipulative Manson-like Family, a cult commune living in the Catskill Mountains of New York State. It is this that Martha is running away from, an idyll of idiocy that serves as a cover for abuse and death. To begin with we don’t know anything of this; we simply see Martha, without explanation, fleeing through the woods.

She runs to another family, that of her sister Lucy (Sarah Paulson) and Ted (Hugh Dancy), her priggish and unimaginative architect husband. They have a large lake-side home in rural Connecticut. So it’s from bucolic authenticity to bucolic plasticity that Martha journeys. This is the first time that the sisters have had any contact in two years and Martha gives little in explanation of where she has been or what she has been doing, other than she has split from a ‘boyfriend’. Bit by bit we gain some comprehension in flashbacks to her previous life in the Catskills.

Lucy, on the other hand, is uncomprehending in her attempts to comprehend her innocent yet damaged sister, though it would seem obvious that she needs help, a victim of some deep-rooted trauma. Lucy’s world, and that of Ted, is one of shallow materialism, a world that Martha challenges and unsettles. Martha, the holy innocent, shocks her uptight sister when she bathes in the nude. She shocks her further by asking if married people fuck, only to drop in to the bedroom at night when Lucy and Ted are fucking! She can’t sleep; all she wants is comfort and companionship. For her sex was always communal...when it wasn’t ritualised and private abuse.

The film is really a study in dissonance and paranoia, a message heightened by its abrupt ending. Martha has escaped Patrick but he has obviously taken possession like a demon, even so far as stripping her of her previous identity and her previous name. She fears pursuit. Perhaps she is being pursued or perhaps it’s all in her mind; we are never quite sure.

The enigma here is deeper, deeper than the brain-washing that Martha has undergone in her two years in the Catskills. There are unanswered questions about who and what she is, where she has come from, questions that go into her background and that of her self-assured and unimaginative sister. She is certainly damaged by her time with Patrick, a gaunt and hellish guru who spouts the usual psychobabble one associates with such people (death is pure love etc.), but her lack of emotional anchor, the very thing that makes her so vulnerable, is surely explained by something unsaid in her upbringing.

Poor Martha, she simply can’t adjust to the comfortable bourgeois existence of Lucy and Ted. She is haunted and we are haunted by the past. She is between worlds, neither fit for the one nor for the other. Unable to let go of her former life, she phones ‘Marlene’ (all the women in the cult have to address the outside world as ‘Marlene’), immediately terminating the call only to be called back. This compounds her paranoia, her fear of pursuit.

Martha Marcy May Marlene is a mesmerising movie. One can’t be quite sure where we are, in reality or in a nightmare, a nightmare that is reality. It’s full of tantalising ambiguity, of fractured ways of seeing, a tale of innocence not corrupted but amplified by corruption. It’s a brilliant cinematic essay on psychological disorientation. Like all the best thrillers it’s a thriller of the mind.