The Mouse in a Spin 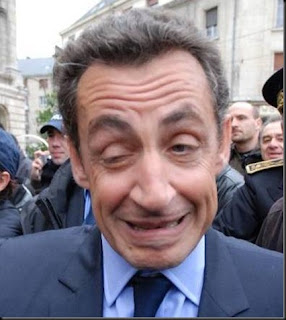 Politics is a constant surprise to me, politicians an endless source of bemusement. I look at a silly little man like the preening Nicholas Sarkozy and wonder how this laughable Mouse, a kind of music hall turn, ever became president of France. It’s a sign of our age, I suppose, the relentless advance of mediocrity, evidenced by Obama in America and Sarkozy in France. The Daily Mail describes him as a ‘right wing conservative.’ Well, if that’s what passes for a ‘right wing conservative’ in France I would really hate to come across a ‘left wing socialist.’

The Mouse is looking pretty desperate these days, ever more fearful that the French public has finally seen him for what he is, a built-up personality in his built-up shoes. He and his shallow wife, all glamour and no substance, may have to hand back the keys of the Élysée Palace soon. With the first round of the presidential election scheduled for the end of April, it looks likely that the French people will send an eviction notice.

Poor little Mouse; he’s been in such a tizzy since David Cameron vetoed the European treaty amendments last December. There he is, throwing the occasional tantrum, the baby who did not get his way. He’s in the huff with Cameron, in the huff with England.

On Sunday, in defending a sharp hike in French value added tax (VAT - a sales tax), he appeared on national TV, even more fatuous than usual. It’s all part of an attempt to breathe a little vitality into the failing French economy. When told by a journalist that a similar hike in British VAT led to a rise in prices, he sneered (there is no mistaking the Sarko sneer) that “The United Kingdom has no industry anymore.”

Au contraire, monsieur, came the response, not from these islands but from his own national press. Le Monde, the leading evening newspaper, pointed out that Britain actually has more industry than France, with production standing at five per cent higher. The claim of the Élysée Mouse was ‘totally false', it went on to stress the point. It also inconveniently mentioned that the rate of industrial decline is stronger in France. Ah, le weekend, labour protection legislation, early retirement and short working weeks, not to mention the interminable lunch, must surely all factor in here.

When I think of Sarkozy I think of the character of Will Roper, the muddle-headed hot head from A Man for all Seasons, Robert Bolt’s play about Sir Thomas More. Roper, much given to changing his mind on questions of faith, is admonished by More “Now listen well. Two years ago you were a passionate churchman. Now you are a passionate Lutheran. We must just pray that when your head’s finished turning your face is to the front again.”

Last year Sarkozy claimed that a similar VAT rise in England had absolutely failed to stimulate the economy. This year he is all in favour, adopting the measure from Germany, where he says that it helped to boost that nation’s competitiveness. I rather suspect that his head will still be turning when he faces the electorate in April, a people with less money in their pockets and even less competitiveness.

Yes, price rises in a country with a declining industrial base and some three million unemployed, a country which recently lost its triple-A credit rating. “If we lose the triple-A, I’m dead”, he said some time previously. At least that’s one point he and I can agree on

Meanwhile Germany’s Angela Merkel has offered to support the embattled Mouse in campaign rallies. Angela on the hustings; the French being lectured to by the fat Reich’s Chancellor. Yes, things really are that bad.
Posted by Anastasia F-B at 15:50