How Are the Mighty Fallen 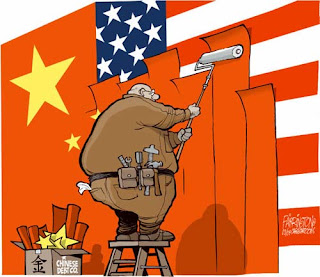 I admire China; I admire the present Chinese government. Oh, please don’t misunderstand me; I’m not saying that I admire communism; I don’t; I loath it, but it’s doubtful that the Chinese system has anything to do with communism in any meaningful ideological sense. No, as an idea it was effectively abandoned at the same time as the Soviet Union collapsed. Russia and China then took the high road to capitalism, chaotic for the former, controlled for the latter.

What I admire is the technique of realpolitik, the wholly Machiavellian outlook of the Chinese. This is likely to be their century not simply because of their economic power but because they play the game carefully, looking always to their own interests.

What a sense of humour Clio, the goddess of history, has, what an acute love of irony. There was America at the end of the Cold War, the only great power left in the world. There was Francis Fukuyama saying that history itself had come to an end, a humourless plagiarism of Sellar and Yeatman’s contention in 1066 and All That, published in the 1930s, that America was clearly Top Nation and history came to a .

But it didn’t, did it? America, the paramount power in 1991, has frittered it all away in one fruitless crusade after another, war after war, intervention hard upon intervention, the gift of the neo cons who have nothing at all to do with genuine conservatism or any kind of political realism. All they achieved was more and more spending with fewer and fewer results. Now the country has reached the lowest point in its history, the nadir, headed by the hopeless and incompetent Barack Obama, not a neo con just a con, a Marxist in Marxist clothing.

Now look at China, the communist capitalist super power. This is a country with the good sense to stand and stare, to consolidate its power, not waste it all away. This is the new empire, extending its influence over much of the developing world, particularly Africa, large parts of which are effectively a Chinese economic colony. I simply could not imagine the Chinese getting bogged down in a hopeless place like Afghanistan for a hopeless cause. I simply can’t imagine any country headed by an intelligent leader doing so, a leader with even the lightest grasp of history.

But America did, here, there and everywhere, taking the wolf by the ears, unable thereafter to let it go. Good sense and good politics would have kept America out of Iraq, a country which, no matter how repellent its dictator, kept a check on the regional ambitions of Iran. But good sense and good politics was not at a premium in the Bush Whitehouse; it has not been at a premium ever since. How are the mighty fallen in the midst of the battle.
Posted by Anastasia F-B at 15:28