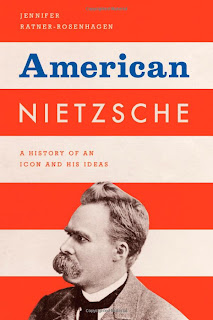 In an article I wrote about the infamous prosecution of John T Scopes (Monkey Trial, 14 October, 2009), an American teacher put on trial in 1925 in Dayton, Tennessee for teaching the Darwinian view of evolution, contrary to local law, I made the point that Clarence Darrow, Scope’s defence attorney, was an enthusiast for the philosophy of Friedrich Nietzsche, as well as the biology of Charles Darwin.

He was influenced here by H. L. Mencken, a leading American journalist. It was Mencken who introduced the German thinker to America in his 1908 book The Philosophy of Friedrich Nietzsche. His Nietzsche came as an angry Moses, a prophet armed, ready to knock away the cosy nostrums of American life. The strong only grow stronger by despising the weak and, so far as Mencken was concerned, by despising Christian morality. The Scopes trial was an ideal opportunity to pour scorn on “booboisie”, the backward ignoramuses of the Southern Bible Belt.

That’s one American perspective on Nietzsche. Interestingly a totally different one was to come from another participant in the Scopes trial - William Jennings Bryant, a former presidential candidate, who acted for the prosecution. The year before he appeared at the trial of Nathan Leopold and Richard Loeb – this time for the defence -, both accused on the kidnap and murder of a teenage boy, for no better reason than to prove that they were Supermen, beyond all conventional notions of good and evil. At least that was Darrow’s argument, claiming that they were acting under the influence of Beyond Good and Evil!

Bryant won both cases, clear in the first (at least insofar as his clients escaped the death penalty), pyrrhic in the second. But perhaps his more immediate victory was over Mencken and Nietzsche. His view certainly was more in harmony with American thought, insofar as Americans thought of Nietzsche at all. After all, this was a thinker contaminated by association with German militarism, then even more contaminated by association with the Nazis. What is the philosophy of an anti-Christian, antidemocratic madman doing in a culture like ours? Why Nietzsche? Why in America?

It was in the essays of Ralph Waldo Emerson that Nietzsche found a “brother soul”, as he puts it. Here was a thinker free from all inherited burden, a believer in the sovereignty of the self, full of scepticism about traditional morality and received religion. “The most fertile author this century so far has been an American”, he declared. Nietzsche used Emerson not to get closer to him but to get closer to himself, as Ratner-Rosenhagen puts it. I would simply add that Americans, in their various ways, have used Nietzsche to get closer to themselves.

To use the cliché, here is a man and a thinker who has been all things to all people. His admirers did not just include obvious social Darwinists like Mencken, but Emma Goldman and others on the left, who saw Nietzsche’s attacks on democracy and religion as a way of arousing the masses from their lethargy.

He was also admired by Jack London, a socialist whose views on the ‘degeneracy’ of the herd are not so far removed from those of Mencken. There is also Margaret Sanger, the high-priestess of American birth control, who read Nietzsche selectively, attracted to his views on Christian sexual ethics, ignoring his obvious misogyny.

That’s just the thing about Nietzsche and America – he has been read selectively, something the author herself is mildly guilty of, a point I’ll come to a bit later. He has been sanitised, if you like, made acceptable to an American audience, a democratic audience; an audience where every man, and woman, has the capacity for endless self-discovery. It’s the Superman as the ordinary man!

It’s true that his reputation suffered – unjustly – by association with the Nazis, but after the war America was given a new reading. Here was a soulful voyager for the existential age, an interpretation advanced – irony of ironies – by Walter Kaufmann, a Jewish scholar and translator who escaped to the States from Nazi Germany in 1939.

The American Nietzsche, as Ratner-Rosenhagen makes clear in a dedicated chapter, is largely Kaufmann’s Nietzsche. I have to be frank and say it’s a slightly dishonest interpretation, more wholesome and less challenging than the raw original!

In some of the more bizarre readings I’m reminded of the character of Otto in the movie A Fish Called Wanda, who, when accused of being an ape, said that apes don’t read philosophy. “Yes they do, Otto”, came Wanda’s response, “They just don’t understand it.” How else is one to interpret the view of Huey Newton, the co-founder of the Black Panther Movement, that Nietzsche thought “slave morality” was a good thing?!

One of my favourite chapters is devoted to the ‘fan mail’ sent by ordinary and unknown Americans and kept by Elizabeth, the philosopher’s Nazi-sympathising sister, a woman who did more to poison his legacy than any other individual. Some of theses missives are beyond eccentric. There is one letter of condolence sent after the philosopher’s death in 1900 by John I Bush of Duluth, Minnesota, who announced to Elizabeth that he was the Superman her brother had been looking for;

May you hereby have the consolation and delight to have lived long enough to know that the visions, prophecies, and hopes of your brother have been fulfilled to the very letter; for the author of this scribbling is the very man prognosticated in Zarathustra.

Bush, hmm; is there any connection here, I wonder?

Now, I said earlier that the author is slightly guilty over her own misreading. Her book, she claims, is less about Nietzsche than interpretations of Nietzsche. But if she begins with Emerson she also ends with Emerson by way of Harold Bloom, Stanley Cavell and Richard Rorty, all of whom have tamed Nietzsche to a degree, leaving out his more anti-democratic sentiments.

Yes, it’s Nietzsche by way of Emerson, a transcendentalist, free of the sarcasm and aggression so evident in his manner of thought and mode of expression. This is a philosopher for all seasons, a philosopher for an American season. It is perhaps a misreading, but who cares. I’m sure Nietzsche, the greatest of all of the great iconoclasts, would have loved it, as much as I loved this book, as much as I admire a country and a people who are continually striving for fresh and novel interpretations. It’s the very thing that keeps thought alive.
Posted by Anastasia F-B at 16:01