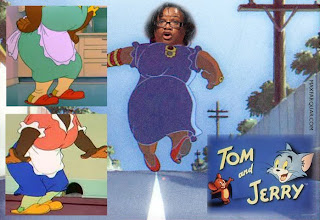 I see Diane Abbott, the Shadow Minister for Public Health, is in trouble again, shooting off her mouth. She’s part of the Labour Party front bench and, as I say, the Shadow…oh, wait a minute, I think that should be Black Minister for Health, out of the shadows! Yes, she’s Black, the caps used deliberately here, for she takes pains to play her race card, something she does repeatedly as an all round mouth and professional Black woman. (Italics give a spot of added emphasis, just in case the point had escaped you!)

Not known for her subtlety, her latest gaff, as you may very well know, was a bird-brained tweet on Twitter, where, in discussion with one of her followers, she made an obviously racist remark, a generalisation about the attitude of whites, or should that be Whites, or maybe Whites.

Responding to a comment from another black woman, to the effect that the term ‘black community’ was born of lazy thinking, Abbott wrote that she was playing into the ‘divide and rule’ agenda. “White people”, came the twit, “love playing divide and rule. We should not play their game.” It’s a tactic, she continued, as “old as colonialism.”

Now the little house collapses around her ears. With several brickbats flying in her general direction (a perfect little storm in the press!), she says that her words were ‘taken out of context’ and ‘maliciously interpreted’. It’s just so amusing when politicians reach for this stale phrase; it must be on the most thumbed page of their professional lexicon. Unfair! Unfair!; you’re taking my words out of context. I’m not at all sure what context her words should be taken in, other than that of her bird brain.

She’s since been forced to issue a weasel-like apology by Big Brother Ed, the leader of the benighted Labour Party. But she will not be prosecuted under race relations legislation, despite a number of complaints lodged with the Metropolitan Police. Now just imagine if Nick Griffin, the leader of the British National Party, had made some off the cuff remark about black people. No, you have no need to imagine. And all poor Aiden Burley did was to hire a costume!

Abbott has history here, a pattern of stupidity all based on her Black perceptions of the world. I wrote about her on the My Telegraph blog in June, 2010, a piece I called Diane Abbott – hypocrite, certainly; racist, perhaps. This followed a broadcast of This Week, a late-night BBC news show, in which she appears as a regular guest. In defending her decision to send her son to an expensive private school, when her own party’s policy is against the independent sector, she said that “West Indian mums will go to the wall for their children.” “So”, Andrew Neil, the show’s host, asked, “black mums love their kids more than white mums, do they?” Answer came there none, whereupon Neil went for the jugular;

Supposing Michael [Michael Portillo, the other regular] said white mums will go to the wall for their children. Why did you say that? Isn’t it a racist remark? If West Indian mums are as wonderful as you say, why are there so many dysfunctional West Indian families in this country? And why do so many young West Indian men end up in a life of crime and gangs? You didn’t want your son to go to a school full of kids who have been brought up by West Indian mums.

The paradox here, as I indicated at the time, is that she clearly does not believe that West Indian mothers are somehow better than other mothers, for she was prepared to buy her son a way out from a significant West Indian presence in her local comprehensive;

In doing so Abbott has freed him from the dangers of the gang culture that besets West Indian boys, something that she herself alluded to recently, a culture nurtured by worthless state schools. But it’s alright for others, the sink comprehensive and all that it leads to, alright for the benighted people who send this hypocrite, this champagne socialist, to Parliament. All black people are equal but clearly some black people are more equal than others.

Diane Abbot represents everything that is wrong with so much of contemporary and public life. I think of the great figures of the past that have walked through the corridors of Westminster and debated in Parliament, figures of stature, intellect and substance. Then I think of this woman, a small-minded, silly, tweeting pygmy; a Black mediocrity. You can take those remarks in any context you like.
Posted by Anastasia F-B at 15:43