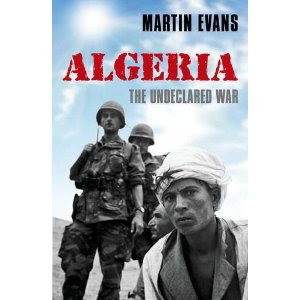 There are two movies which gave me some limited understanding, like an archaeological evaluation, of the tragic modern history of Algeria – The Battle for Algiers and Of Gods and Men.

On the face of it they are about two completely unconnected events. The first deals with an episode in the Algerian War of Independence, which lasted from 1954 to 1962; the second with an incident in 1996, when a small community of French Cistercian monks, living in a monastery in the Atlas Mountains, were kidnapped and murdered, allegedly by mujahedeen guerrillas, fighting a prolonged and brutal war with the government.

In Algeria: France’s Undeclared War Professor Martin Evans, who has previously published on Algerian history, weaves the various threads together. It’s an exhaustive piece of work, looking deep into the prehistory of a conflict that stands apart from Africa’s other wars of liberation in the intensity of its brutality. It also draws attention to its lasting significance, an unhappy postscript.

For a long time the Algerian conflict, like Vichy and war-time collaboration in general, was a particularly sensitive area in French national consciousness, visited at some peril. How could it not be, given that over a million settlers, the so-called Pieds-Noirs, were obliged to resettle in metropolitan France after Algeria achieved independence in 1962? Full of bitterness and resentment against the right-wing government of General De Gaulle, they went even further to the right, forming an active constituency that would eventually become the backbone of Jean-Marie Le Pen’s National Front.

That’s perhaps the central paradox of France’s Algerian conflict: it was started by the left and ended by the right. In 1956 Guy Mollet, head of the Socialist-led Republican Front government, ordered the army to begin ‘pacification’ operations against Algerian nationalists. Although himself opposed to colonialism on principle, he had a duty, as he saw it, to defend the civilising mission of the Fourth Republic against the fanatical and barbarous forms of Algerian nationalism. As so often the defence of civilization descended into the forms of barbarism allegedly being fought against.

Evans writes that Algeria was one of the longest and most difficult episodes in the whole decolonisation process. There is one simple reason for this: officially it wasn’t a colony at all; it was part of metropolitan France - it had been since the 1880s -, no different from Brittany or Normandy. It was an illusion, of course, a legalistic fiction, but one with particularly bloody consequences.

The civilising mission was always barbarous. From the outset in 1830 the French intrusion into what was then an Ottoman province was marked by savagery. This was a genocidal war, one of partial ethnic cleansing, which might usefully be compared with the American expansion in the West at the expense of the indigenous peoples. It is estimated that by the mid-1850s Algeria had lost almost half of its pre-colonial population of some four million people. That’s when the settlement was planted, with roots so deep that they could only be pulled up in extreme violence.

The difference between the French and American example is that there were never enough settlers; that strong as they were the native Algerians were stronger. Fighting a war against history and demography, the French settlers, unlike the American colonialists, could never go their own way, which meant that France could not go its own way either without difficulty; without the death of one republic and the birth of another.

The French were brutal, certainly but, as Evans shows, the Algerian Front de Liberation Nationale (FLN), their leading opponent, were just as brutal, not just towards the colonialists but towards rival nationalist movements, applying savage cruelty even to deviationists within their own ranks. Liberation for them was about achieving power, to be held at all costs, which was to lead eventually to their own ‘pacification’ campaign against the Islamists in the 1990s.

The French mission was always hopeless. It gave rise to the ‘long hatred’, one of the key themes, as the author argues, that led to the revolt of 1 November, 1954, a new plague, that Albert Camus, author of The Plague and himself a Pied-Noir, had not anticipated.

There had been a prologue several years before in eastern Algeria, when a hundred Pieds-Noirs were killed in violent demonstrations, their corpses afterwards horribly mutilated. In wholly disproportionate acts of retaliation, the French slaughtered thousands, destroying many villages. “Nothing could be the same again,” Evans writes, “Rural Algeria had confronted European Algeria, producing a society more polarised than ever.”

The war caused thousands of lives and has left an unresolved legacy that exists so far as today; in Algeria, where the FLN ensures that there is no end to the Arab Winter; in France, where the 2005 riots by alienated migrants showed that the country still suffers from the ‘Algeria syndrome.’ For De Gaulle Algeria was a millstone around the neck of France. It still is.

Evans is to be congratulated on splendid piece of research, lucid, scholarly and balanced. He unfolds a tale whose lightest word harrows up the soul. Once again the lesson of history is that we learn nothing from history, otherwise we would not have had other ‘civilising’ missions in Afghanistan and Iraq, other plagues.

Everybody knows that pestilences have a way of recurring in the world; yet somehow we find it hard to believe in ones that crash down on our heads from a blue sky. There have been as many plagues as wars in history; yet always plagues and wars take people equally by surprise
Posted by Anastasia F-B at 15:36