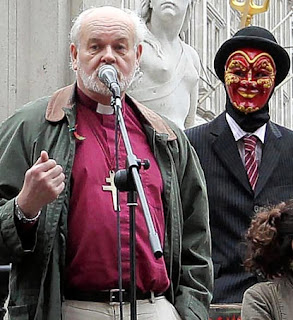 James Delingpole is one of my favourite journalists. He was in great form last month in the Telegraph, aiming several well-placed shots at the risible Dr Richard Chartres, the Bishop of London and the third most senior clergyman in the Church of England.

Apparently the benighted bish visited the Occupy protestors on Christmas Day, handing out a box of chocolates in his munificence. These are people whose dirty presence (they certainly look dirty to me) has disfigured Saint Paul’s Cathedral for several weeks now, the worst kind of rent-a-mob lowlifes in their ugly little tents, like some kind of gypsy encampment.

The sooner they are off the better, one would have thought; the better for London, the better for Saint Paul’s and the better for the Church. But, no; Chartres has promised them a permanent memorial. With the chocolate came some saccharine: “The canons have been very imaginative and consulting with the protestors about how to leave a legacy of the protests. We are looking for honouring what has been said when the camp moves on.”

Is he married, I wonder? He reminds me of Bishop Thomas Proudie from Barchester Towers, the novel of nineteenth century clerical doings by Anthony Trollope. If so, he really should have a wife as indomitable as Mrs Proudie to put him in place, to draw him away from his embarrassing public absurdities.

Dear James might serve in the role, judging on the basis of his remarks, direct and to the point;

What’s particularly depressing about this episode is that Chartres is supposedly one of the Church’s more traditional senior clerics. If this is the line the Church’s reactionary old school is taking, imagine what insanities its more progressive elements are yearning to impose on us. Presumably they won’t really feel that justice has been done until St Paul’s has been razed to the ground and replaced by a permanent Anti-Capitalist Peace Camp.

Actually, I’m going to change gear completely here. I almost never read the comments that follow articles, written by so many jackals following a lion, petty, snarling and vicious. On this occasion I’m glad I did because there were truly excellent remarks by someone posting as Tayles. His point was quite simple, that the leftists are not opposing capitalist society as it really exists, but a fictionalised version that forms part of a broader narrative;

According to this narrative, the poor and the disadvantaged are victims of oppression and prejudice by the rich and powerful. Capitalism is the economic expression of this travesty, allowing the rich to hoard wealth at the expense of everyone else, who must make do with whatever crumbs the rich deign to brush from their table.

As he quite righty says this is rubbish. I would only add that it’s complete rubbish. Capitalism, unlike socialism, isn’t even a system; it’s freedom, it’s what happens when people are left to their own devices. Condemn economic liberty then one condemns personal liberty.

But the left-wing narrative, the narrative embraced by the Protest crowd, is far more satisfying for some, Tayles proceeds, portraying as a ‘mistake’ the kind of society that evolves when people are free to express their wants and needs. It condemns success as much as pardons failure, all gains, of course, being ill-gotten.

It’s a narrative that would turn the things upside down, granting wealth and power to those who, by their natural incapacity, would be denied these things. It creates, above all, a paradigm of good versus evil: “If you are a clergyman, a control freak, a metropolitan poser, an over-entitled layabout, or an envious toad, the left-wing narrative holds considerable appeal.”

However I’m feeling charitable enough in this New Year to offer Chartres and the canons suggestions for the prospective permanent protest memorial. I think a mountain of Starbuck cups might serve, cast in bronze, or an unmade tent in the style of Tracey Emin. I would favour the latter. Perhaps talentless Tracey might even be commissioned for the project? The Bishop might even be charitable enough to extend the principle of memorial to embrace the summer riots. A statue of a hoodie carrying away a TV would be good, a real anti-capitalist statement.
Posted by Anastasia F-B at 16:15