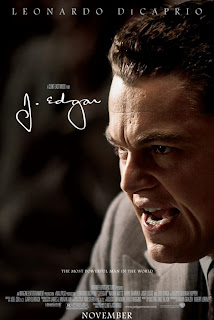 Hoover, the long standing Director – Dictator might be a better word - of the Federal Bureau of Investigation, is in many ways an even more controversial figure than Thatcher. A man of impeccable moral stature, the self-appointed guardian of all that was good in American life, he had no scruples at all in subverting civil liberties in pursuit of his particular ends. At his funeral then President Nixon said that he was;

Oh, but how are the mighty fallen. He also, according to his many detractors, personified venality and corruption, a message that his been relentless hammered ever since, to the point where his legacy, his very real contribution to fighting crime and subversion using the latest techniques, has been obscured under a mountain of superfluous and vicious tittle-tattle.

J. Edgar, directed by Clint Eastwood and based on a script by Dustin Lance Black, goes some way towards rehabilitation. It paints a more nuanced portrait of a complex and driven man. Still, it does not avoid the old canards, the wholly unproven contention that Hoover was a closet homosexual and cross-dresser.

That the old queen never came out is clearly the fault of his mother, a commanding performance by Judi Dench, who tells him that she’d rather have a dead son than a daffodil for a son. A life of frustrated sexual tension lies ahead, touched on in Hoover’s relationship with Clyde Tolson (Armie Hammer), his long-standing deputy at the FBI.

My criticism here is that Hoover’s sexual preferences, whatever they were, are not that material to the story of his life and times. His principle relationship was not with Tolson or with Helen Gandy (Naomi Watts), his life-long secretary and confidant, but with the FBI, the organisation which he created virtually single-handed, or rather shaped into a tough, modern crime fighting force out of the old amateurish and bumbling Bureau of Investigation in the Justice Department.

I admire Eastwood as a director; I hugely admired movies as diverse as Gran Torino and Million Dollar Baby. But I have to say that there is a falling off with J. Edgar, signs that he is no longer quite in command of the medium as he once was. The pace is uneven and too much of the story is taken for granted, particularly over the kidnapping and death of the infant son of Charles Lindberg, the aviator, a defining moment in the history of crime in America.

Incidentally, speaking of aviators, DiCaprio seems to slightly reprise his depiction of Howard Hughes in The Aviator. Like Hughes his Hoover uses a handkerchief to clean his hands after he greets someone, another hint, presumably, of deep-seated personal neurosis.

On a more technical point it was a huge mistake to allow actors playing their young selves also to play their old selves, caked under ever more grotesque and ridiculous layers of rubber, to the point where they resemble puppets. This was an error avoided in The Iron Lady, where the young Margaret and the old Margaret are entirely different people. As J. Edgar cuts back and forward between the present and the past a considerable amount of time must have been spent in donning and discarding prosthetics!

It's a thoughtful film, though perhaps not thoughtful enough. Even so, setting the central performances to one side, it’s also a plodding and ponderous one, coming close to its subject, then skipping away. After some two hours I was no closer to understanding the real Hoover than I was at the outset.

The thing I found most frustrating was the failure to draw parallels between the Red Scare that swept America after the First World War, touched upon in detail, and more modern concerns and threats. The central question about Hoover’s career surely must the extent to which it is legitimate to subordinate civil liberties to national security in times of emergency, not his chaste and asexual personal affairs. Director and writer are to be commended for humanising the man, but, as another reviewer writes, they have in the process created a kind of bureaucratic version of Brokeback Mountain.