A Party for All Seasons 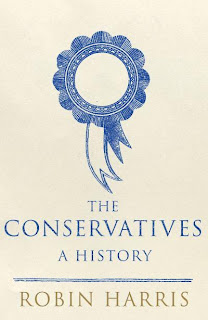 “There is properly no history; only biography,” so wrote Ralph Waldo Emerson. Robin Harris in The Conservatives: A History has remained true to this dictum, writing what is in effect a biography of the Conservative Party. Thomas Carlyle would have approved, inasmuch as it is an account of the great, and not so great, who have made their mark on one of the most remarkable and enduring political associations in history.

It’s a commendable piece of work, at once scholarly detached and polemically engaged, written by a man who is better qualified than most for the task, both as a historian and as a political insider. The author of an elegant biography of the French statesman Talleyrand, Dr Harris is a former Director of the Conservative Research Department, during which time he acted as Margaret Thatcher’s special adviser and speech writer. He is presently writing a biography of the former Prime Minister, to be published after her death.

It’s a slippery beast, the Conservative Party, almost impossible to define in terms of a core philosophy, anything beyond conservatism, that is, a reverence for established tradition and a suspicion of novelty. Disraeli famously said that England does not love coalitions but the Tories themselves are a kind of coalition of different interests, with the pattern shifting and changing over time. The truly remarkable thing is that what began as an alliance of rural aristocrats, ranged behind the crown, ended as party of the urban middle-classes; from Bolingbroke to Thatcher in several remarkable steps!

The Tory Party is a chameleon; it always has been, paradoxically committed to the way things are yet capable of quite revolutionary adaptations, unlike its great rival the Whigs, once the strongest contenders for the future, now cast well into the past. This is not because it represents some noble and enduring principle, no; it’s simply because it is a pragmatic force built for one thing and one thing alone – to win elections.

In his introduction Harris quotes from the resignation letter of James Purnell, a former Work and Pensions Secretary, sent to Gordon Brown, the then Prime Minister, full of all sorts of risible and mawkish sentiments in reverence of the Labour Party – “We both love the Labour Party...We know we owe it everything and it owes us nothing.” Harris’ comment on this is telling;

No Conservative politician at any stage of the party's history would have written such a letter. No one has ever pretended to "love" the Conservative Party. It is doubtful that even the most sentimental backbench MP would have claimed to "owe" the party "everything". Any serious Tory figure adopting such a pose would incur immediate ridicule. The Conservative Party exists, has always existed and can only exist to acquire and exercise power, albeit on a particular set of terms. It does not exist to be loved, hated or even respected. It is no better or worse than the people who combine to make it up. It is an institution with a purpose, not an organism with a soul.

Harris traces the origins of this ‘institution with a purpose’ back to the great constitutional and religious struggles of the seventeenth century, coming to a head in the Glorious Revolution of 1688. The Tories were the High Church Party, the party of insiders which, time and again, adopted outsiders as mentors and guides. Evolution and adaptation, that’s the key to a party that was Tory and then Conservative and then Unionist and then Conservative again.

The intellectual foundation of the modern party was laid, irony of ironies, by Edmund Burke, an Irishman, a Catholic-sympathiser and a Whig! Burke reacted against the horrors that followed in the wake of the French Revolution. So, too, from the ministry of Pitt the Younger onwards, did the Tories, reacting against the forms of abstract thought and utopian politics that had brought it on.

But reacting did not invariably mean reaction; it meant embracing change when change was unavoidable, often turning it to conservative ends. After all, it was the Tories, the High Church Party, who introduced Catholic emancipation; it was the Tories, the Party of the Landed Interest, who repealed the Corn Laws. It was the Tories who began by opposing extensions to the franchise only to extend it right down to the urban working classes. In Salisbury, the pessimistic aristocrat who hated the idea of democracy, they had a leader who created ‘villa Conservatism’, making the party a home for the new middle classes, a process from which so much electoral benefit was to be drawn in the course of the following century.

It was the Conservatives, the religiously orthodox, who were so brilliantly led by a converted Jew. It was the Conservatives, outwardly the most ‘sexist’ of all parties, who were to be the first to elect a woman as leader, a woman who went on to become the country’s most revolutionary Prime Minster. Paradox, hard upon irony, hard upon paradox – that’s the story of the Tories.

Harris writes with such brilliant insight. His is a story of personalities, each shaping the party in their own image. I’ve long taken the view that Disraeli’s vicious attacks on Sir Robert Peel after the repeal of the Corn Laws was born of ambition rather than principle, but Harris persuasively argued that Peel had been a bad leader, too remote from his party. To make one major change of direction without consultation – that over Catholic Emancipation - , is a misfortune; to make a second one – that over the Corn Laws – looks like carelessness. The comparison here is surely with Ted Heath, another remote and ill-omened leader.

The author has penetrating things to say about all of the party’s leaders. He’s particularly good on Disraeli, an organisational and political genius whose credentials as a reformer have been hugely exaggerated by posterity. His overriding concern, rather, was for the monarchy, the landed interest and national prestige. His zeal was for the greatness of England, as Salisbury, his successor as party leader, put it in a posthumous tribute.

Disraeli along with Salisbury, the longest serving Tory Premier, and Margaret Thatcher constitutes the author’s triumvirate of greats, a contention with which I have no argument. Winston Churchill, I also agree, is a case sui generis, a political maverick, whose reputation was surely only saved by Hitler! Party meant little to him, even less in the context of his wartime Cabinet, and on so many issues he was just as ‘unsound’ as Lord Randolph, his brilliant but mercurial father, too full of greatness, or a perception of greatness, for his own good.

I also agree with his lows, particularly his assessment of Harold Macmillan, the grossly overrated ‘Supermac’, whose irresponsible economic and social policies were to create a poisonous legacy for the party and the country. Disraeli famously said of Peel that he caught the Whigs bathing and walked away with their clothes. The same might be said of Macmillan, only in his case the clothes were those of the Labour Party. Harris writes of him;

By some definitions, and by analogy with Disraeli, he could just about count as a Tory. But, by no known definition was he philosophically speaking a conservative. This, through his legacy to the Conservative Party, was a problem – nor necessarily one that is extinct.

I love the author’s style, his liberal peppering of waspish and mordant wit. Some barbs made me giggle, particularly that delivered at Arthur Balfour, who succeeded Salisbury, his uncle, as party leader and Prime Minister. Balfour said that the Carlton Club, one of the well-springs of modern Conservatism, was a ‘beastly’ place, infested with political bores. Harris writes “When Balfour, or any other Conservative leader, lost the bores, he lost the party.” Similarly his verdict on Stanley Baldwin, the inter-war face of what I think of as Ostrich Conservatism, is absolutely spot on;

Baldwin won huge majorities. He just did not know what to do with them. At a deeper level, undoubtedly he reflected the mood of the times. This, in fact, was the problem. He reflected it too well. In Baldwin the country got what it wanted and, arguably, to stray into more disputed territory, it got what it deserved. But it did not get what it needed.

I wrote at the outset that The Conservatives is both a work of scholarly detachment and polemical engagement, the polemical element becoming ever more obvious as we move towards the present day. The final chapter is headed Cameron’s Party?, with a question mark that does not speak so much as shout! History’s judgement on David Cameron is indeed open – is he Peel or is he Heath or is he still the ‘heir to Blair’? We shall see.

The author is generally fair (his brickbats are thrown elsewhere), though I share his scepticism over the present modernising project, over what John O’Sullivan, writing in the National Review and elsewhere, describes as the “Dianification of Toryism”, promoting all sorts of trendy causes that no ordinary Tory voter gives a damn about. Conservatives will never win elections by pretending to be liberals.

The final paragraph of the final chapter simply soars;

Disraeli, the Jewish outsider who championed traditional institutions, Salisbury, the fastidious aristocrat who won over the bourgeoisie, and Thatcher, the woman who crushed the unions, the Argentinean Junta and most of the Cabinet, and restored the economy to health, are all, in their different ways, completely surprising. It matters to the country that the Conservative Party should retain its capacity to produce surprises, and so harness the eccentric, distinctive qualities of British national greatness.

This is an entertaining, engaging and lively book with so many highs. That only makes the occasional lows all the more irritating. For example, Henry Petty-Fitzmaurice, the fifth Marquis of Landsdowne, who succeeded Salisbury as Foreign Secretary in 1900 (hitherto he had held this post in conjunction with that of Prime Minister), is never properly introduced, with the result that the index, presumably compiled by someone other than the author, conflates him with his grandfather, the third Marquis, a leading Whig politician.

Similarly, when Salisbury resigned from the premiership in July 1902 the author writes that “the Queen took Salisbury’s advice and asked his nephew [Balfour] to head the government.” Can this be Alexandra, wife of Edward VII and queen consort? Edward was indisposed at the time, ill in the aftermath of peritonitis, so I suppose it might have been Alexandra, though I wasn’t aware that consorts had that constitutional authority. It certainly can’t be Victoria, the only other Queen referred to up to this point, who died over a year before!

Once again this is me reading with the eye of an academic, ever attentive to detail, no matter how petty. Set against the overall value of a book that is bound to serve as a standard modern introduction to the history of the Conservative Party it’s of little substance, mole hills beside a mountain.
Posted by Anastasia F-B at 15:46