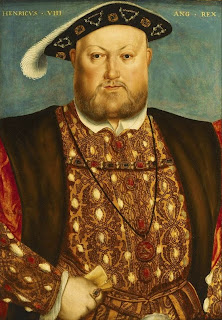 Following my recent piece on the European Court of Human Right’s ruling that England should be a refuge for the huddled masses of foreign terrorist, yearning to breathe havoc, I read Following in Henry’s Footsteps?, a thought-provoking article by Stephen Cooper in the January issue of History Today.

We, as a nation, are the plaything of a supra-national power, a new Roman conglomerate, if you will. But this is not unique in our history; we have been here before, subject to the decrees and laws of an old Roman conglomerate.

David Cameron has talked in general terms about the repatriation of powers from Europe. Henry VIII, suffering from a little local marriage difficulty, did not just talk; he acted. He wanted a divorce from Catherine of Aragon, his first queen, but in such matters the Vatican acted as the Supreme Court. Pope Clement VII was not inclined to go along with the royal wishes; he was not ‘simpatico to the direction of change’, as Tony Blair would doubtless express the point.

So, with the aid of Thomas Cromwell, his chief minister, the king cut the umbilical cord, the age-old link between the English and the Universal Church. He repatriated all legal powers to England in the 1533 Act of Restraint of Appeals. This had the effect of ending all appeals to Rome, allowing matters to be settled on the spot, declaring to the world that England was an empire, not subject to the rule of a foreign princes or courts. How wonderful!

The thing is, you see, up to that point England effectively had two legal systems; it had ever since the Norman Conquest. There was the common law of the land and there was canon law, the law of the Church. Two sets of laws meant two sets of courts, with the ultimate arbiter in all matters affecting canon law being the Vatican. This included all family law, issues pertaining to wills and, of course, marriage. This was the basis of Papal power in England, which by the early middle ages was considerable.

Papal interference got so bad that, in a deeply anti-clerical mood, Parliament enacted the Statute of Provisors and Praemunire in the reign of Edward III, which attempted to curb papal interference. But the two systems still remained in place until Henry’s marriage problems saw not just a break with the Roman Church but an amalgamation of law, or, if you prefer, the repatriation of law.

The Act of Restraint of Appeals had great significance in English history, far beyond offering Henry, as head on an independent English Church, a way of ending the Roman logjam. It was a declaration of political sovereignty, an Act of Parliament rather than a royal proclamation.

The danger in this usurpation of canon powers is that Rome would place the country under an interdict, as it had in the time of Innocent III, the great medieval pontiff, which put a rebellious King John firmly in his place – the papal pocket. To prevent this, the Act allowed for imprisonment of any priest who refused to perform the sacraments. More than that, the provisions of the fourteenth century Statutes of Provisors and Praemunire was brought to bear, threatening those who invoked the authority of the Pope with confiscation of property.

The Act was so successful that even during the Catholic reaction of Henry’s daughter, Mary, it was never repealed. For all her orthodoxy Mary remained Supreme Head of the Church, effectively the Pope in England. There were no more appeals to the Papal Curia, no more foreign laws.

We were warned, but too few were prepared to listen, warned of the approaching flood of alien law, set to drown our own inherited traditions. In 1975 the people in this country were deceived, deliberately so. They thought they were voting for an economic union, but the small print contained so much more.

The year before the referendum on membership of what was then the European Economic Community, Lord Denning, the Master of the Rolls, in Bulmer v Bollinger observed –“When it comes to matters with a European element the Treaty is like an incoming tide. It flows into estuaries and up the rivers. It cannot be held back.”

History has been reversed. We are far more in thrall to the new Roman power than we ever were to the old. How I admire the audacity of Bluff King Hal. Henry! Thou should be living at this hour: England hath need of thee.
Posted by Anastasia F-B at 15:24