Some Animals are More Equal than Others 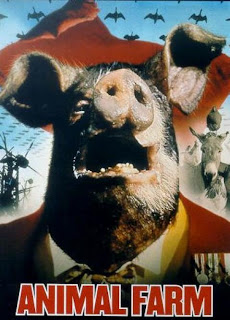 Earlier this month the African National Congress, the ANC, celebrated the hundredth anniversary of its foundation. This is the party of Nelson Mandela, terrorist come secular saint, that rules South Africa, the wonderful ‘rainbow nation’…or a sad cesspit of corruption.

The latter is the view of Archbishop Desmond Tutu, the country’s other secular saint, who once observed that the ANC had stopped the gravy train only long enough to get on board. Actually he may have underestimated the problem, at least according to the writer Zakes Mda, who has said that the new South Africa is overtaking Nigeria in patronage and cronyism.

The ANC has been sadly misrepresented. In the good old bad old days of apartheid it was taken to be the face of black South Africa. In reality it was only ever the face of a self-interested and self-serving minority, one that hijacked a cause to advance its own ends. The old apartheid state was bad; the new rainbow state headed by Jacob Zuma, its corrupt, polygamous and laughable president, is not really that much better.

In some ways South Africa is a little like post-communist Russia, a place where a few well-placed individuals established a monopoly over the good things in life. It was a case of power not to the people but power to themselves. Almost two years ago I wrote an article in which I made the following points;

Zille, the conscience of the nation, has faced death threats, been called a “filthy whore” and “an exponent of a new apartheid” for her outspokenness. But look beyond the villas of the ANC cadres, look beyond the houses and the cars, and one might easily conclude that there is no need for a new apartheid, for the simple reason that the old apartheid is still very much in place; that the new bosses look very much like the old bosses, except for the colour of their skin; that oppression and poverty feel like oppression and poverty no matter if the ruler is white or black. In many places people still live in squalid townships where the government fails to deliver on the most basic services, including clean water, sanitation and power. Protesters have been dispersed by riot squads using rubber bullets.

Under apartheid the black majority were second class citizens. They are still second class citizens. To deflect them from the miserable condition of their lives a scapegoat has been found, and the scapegoat is the vulnerable white minority, repeatedly blamed for all of the country’s problems by the black racist Julius Malema, onetime head of the ANC’s youth wing, a man who takes Zimbabwe’s Robert Mugabe as a model. Yes, indeed; Robert Mugabe, who transformed one of the richest nations in Africa from a breadbasket into a basket case.

Richard Dowden wrote in the Spectator that the new South Africa is an archipelago of fortified islands of luxury in a sea of poverty. To be more precise, it is a fortified sea of black luxury amidst a sea of black poverty.

The ANC has become what it always was, not a party for the people but a party for itself, an elite determined to protect its own interests. In November of last year the nation’s parliament was told by Willie Hofmeyr, head of the Special Investigative Unit, that some five to seven billion dollars a year was being lost in corruption, negligence and incompetence in the public service. Not long after he was sacked.

Fearful of further exposure the government drew up the Protection of State Information Bill, a measure which effectively treats any investigation of official activity as spying, carrying a possible twenty-five year jail sentence.

Here we are eighteen years after the ANC came to power and South Africa has one of the highest rates of inequality in the world. The rich get richer and the poor get poorer. The poor may be poor, miserably poor, but at least they have one comfort in their bleak lives – they no longer suffer from oppressive white rule. But, alas, the pigs are in the trough. All animals are equal. But some animals are more equal than others.
Posted by Anastasia F-B at 15:09