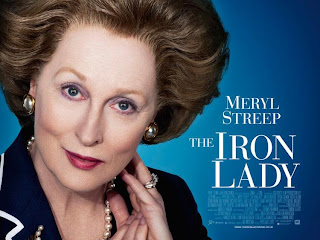 There is one compelling reason to see The Iron Lady – Meryl Streep’s performance as Margaret Thatcher. This is not acting; it’s almost as if an uncanny doppelganger has come to life, a performance which seems to clone the real-life Thatcher; her speech patterns, her mannerisms, her movements, her gestures; a fine observation of the finest details. This really is iron. The movie itself, though, is a little more like wood.

I have no hesitation at all in saying that Margaret Thatcher only stands comparison with Oliver Cromwell as the greatest commoner in British history. When people like Ted Heath, her immediate predecessor as leader of the Conservative Party, and John Major, her immediate successor, are long forgotten, her legacy will continue to inspire and divide. She will continue to be loved and hated: a Roundhead for the Cavaliers, a Cavalier for the Roundheads; there can be no indifference here.

Given that the subject is still alive, The Iron Lady, directed by Phyllida Lloyd, was always going to be a controversial film, all the more controversial because there is a strong focus on the alleged effects of Baroness Thatcher’s dementia. As a plotting device it works, at least up to a point, focusing in and out of the key events in her remarkable life. But the state of her mental health takes far, far too much time, crowding out so much of greater significance.

It’s a sympathetic portrait, certainly; it humanises a woman that so many have demonised, but it really casts her achievements somewhat into the shadows. The highlights are all there but presented in a rather shallow, episodic fashion, sung out, if you like, as political karaoke, appropriate enough, as Lloyd’s only other movie was the smash hit Mamma Mia.

The narrative is also rather confusing, events not coming in sequence. Moreover, Thatcher’s observation that a woman would never be Prime Minister in her lifetime was made in 1970, not after she became leader of the Conservative Party, when it stood to reason that a woman was likely to become Prime Minister if she managed to win a general election!

In so many ways The Iron Lady is more of a personal odyssey, the Journey of the Grocer’s Daughter, from hopeful dawn to sad twilight. As a biopic it simply does not stand comparison with Oliver Stone’s Nixon, which managed to humanise another controversial figure without skimping on the political substance. It’s also too ambitious in scope, far less focused than The Queen.

As a movie it’s really more about aging and loss than anything else, and it might be best appreciated on that level. It managed to beguile and infuriate me by turns; beguile because of the sympathetic intimacy; infuriate because I wanted so much more, wanted to understand just what motivated her to act and believe as she did. I simply got no proper sense of the real Thatcher, the woman within the politician, the politician within the woman.

The play on Alzheimer’s reminded me of Iris, the 2001 biopic on the life of the writer Iris Murdoch, all the more so as Jim Broadbent reprises his role as supportive partner in the midst of decline. In The Iron Lady he is there as Denis, Baroness Thatcher’s husband, except that he is not there at all, merely a ghostly companion in her own demented mind, the only person with whom she continues to share intimacies. Broadbent’s performance is dryly amusing, though perhaps a little too much of the amiable buffoon.

The flashbacks take us to Grantham and the early days of then Margaret Roberts, full of wide-eyed admiration for Alfred (Iain Glen), her grocer-come-politician father, a living representative of the kind of solid, unassuming virtues that made England the greatest nation of shopkeepers in history. Young Margaret is played by Alexandra Roach, another wonderful performance, second only to that of Streep. In what I thought the best scene in the movie we see her from above, freshly elected to Parliament in 1959, a flash of young and feminine blue in the midst of middle-aged masculine grey.

There are two other performances I would flag up, that of Anthony Head as Geoffrey Howe, Baroness Thatcher’s onetime cabinet colleague and eventual political assassin, and Olivia Colman, who plays her daughter Carol with affection and devotion, receiving little in return from a mother who is too self-absorbed, a mother who clearly prefers Mark, her distant, and absent, son.

Still, with all of the wooden inadequacies, I came away from The Iron Lady with an even greater sense of affection for the best British peace-time Prime Minister; a woman who was tried time and again and not found wanting; a woman who had the guts and determination to see things through; a woman who had the courage to tackle fascist thugs, trade union bullies and European bureaucrats - enemies without and within - when nobody else did, certainly not the dead sheep and appeasers with whom she was obliged to share office. Her betrayal in the end was the shabbiest act in Conservative Party history, a political assassination from which it has taken two decades to recover.