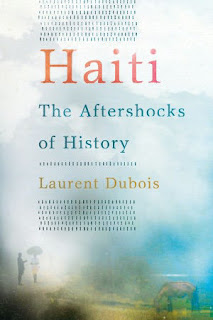 I wanted to go to Haiti, one of the places that I thought of visiting during my gap year before going up to university. At school I read Graham Greene’s novel The Comedians, set in the Haiti of Papa Doc Duvalier, horrible and fascinating at one and the same time. Add to that my discoveries about Vodou and my subsequent reading into Haiti’s past then the magnetism became compelling. But I was warned against going; it was too dangerous, the place was too unsettled, there were too many risks. I went to Cuba instead, a decision I have never really regretted.

I don’t suppose I will ever go to Haiti now. Still, my fascination with the place remains; my fascination with the history, the religion, the culture and the people. This is a country that fought hard for its independence, finally achieved in 1804. But for years after French slavers were not reconciled to its existence. In the end this impoverished country was forced to buy recognition, to pay France for the value of the lost colony and the lost slaves at a cost of some $21 billion in current values. In other words, to achieve full independence, the people of this land had literally to buy their own hides.

It’s easy to forget - indeed, if one ever remembered - that Haiti is the second oldest self-governing nation in the western hemisphere, only seventeen years younger than the United States. But the newly independent American States, already rich, had a huge potential, a manifest destiny to meet. What did Haiti, the slave republic, have ahead; what was its destiny? Why, little but internal divisions, corruption, misrule and tragedy. The first truly ‘anti-imperialist’ nation on earth, and the first black state, it could expect little help or understanding in a racist and colonial epoch. Indeed, its very existence wasn’t recognised by the United States until 1862, until that country itself was fighting a war partially inspired by the fact that some Americans owned other Americans.

In the wake of the devastating 2010 earthquake came foreign journalists, trying to make sense of the whole thing, trying to make sense of Haiti, a victim of nature and of history; a victim of many perceived flaws of an internal and external nature. As a corrective to some of the more simplistic views Laurent Dubois, a professor of history at Duke University, has published Haiti: The Aftershocks of History, a well-researched, well-written and, it has to be said, engagingly partisan account of the country’s longer quake.

He takes his stand early on, rejecting the prevalent view of the Haitians as either victims or villains;

The true causes of Haiti’s poverty and instability are not mysterious, and they have nothing to do with any inherent shortcomings on the part of Haitians themselves. Rather, Haiti’s present is the product of its history: of the nation’s founding by enslaved people who overthrew their masters and freed themselves; of the hostility that this revolution generated among the colonial powers surrounding the country; and of the intense struggle within Haiti itself to define that freedom and realize its promise.

It’s certainly a catalogue of misery and misfortune, the misery beginning with the forms of slavery practiced by the French, which the author quire rightly describes as ‘murderous’; a system where people were literally worked to death, their place taken by fresh imports from Africa. Freed of one crippling burden in 1804, the people were left with another - a ruinous cycle of debt. To pay off the compensation demanded by the French, the newly independent country was forced to borrow heavily from banks in America and other countries, paying the principle sum plus accumulated interest. The debt to France was only paid off in the 1940s, by which time the cycle of poverty and underdevelopment was spinning ever faster.

That was bad enough. Worse: freedom did not bring freedom; it brought America. It brought a new form of imperialism, attitudes and perceptions that might be best summed up in the words of William Jennings Bryant, Secretary of State in the administration of President Woodrow Wilson – “Think of it! Niggers Speaking French!”

It was Wilson, later wanting to make the world safe for democracy, who sent the Marine Corp to occupy Haiti in 1915, an occupation that was to last for almost twenty years. It’s a pity this episode is not better known, the first of the ‘pacification’ missions that were to be a feature of US foreign policy so far as today. It was a wretched example that might have served as a warning over later interventions in Vietnam, Afghanistan and Iraq. As Dubois describes, the American intervention, undertaken in the pretext of reforming Haiti’s chaotic government, was in some ways just as murderous and exploitative as that of the French. Even after the Marines pulled out in 1934 the aftershocks were to be long-lasting.

When one begins to think things can’t get worse they do! Foreign oppressors went; native oppressors came, none more oppressive than the Duvaliers, father and son, who terrorised the country with their Tonton Macoutes militia, thought to be responsible for the deaths of as many as sixty thousand people.

The paradox of this book is that while Dubois argues against the view of ordinary Haitians as victims his narrative shows time and again that that’s exactly what they are, the victims of foreign greed and aggression; the victims of corrupt and venal politicians who served no other interests but their own. His is also an exercise in the narrowness of blame, and he completely fails to tackle the bigger question, namely to what extent are the Haitians responsible for their own shortcomings?

Haiti: the Aftershocks of History is a reasonably good book, though a less than perfectly objective for my taste. It’s certainly better on the early part of the history, falling down over more recent events, particularly in regard to the role played by Jean Bartand Aristide. The coups of 1991 and 2004 are dismissed in a few inadequate lines. The author maintains that the events of 2004 in particular are too recent to evaluate properly. Well, maybe they are but at least the attempt should be made.

In the end I found this book, while commendable in many parts, an exercise in excuses and apologetics, a crutch for a country that surely has show time and again that the last thing it needs is a crutch. The message seems to, even so far as the aid efforts, governmental and non-governmental, that followed the quake, leave Haiti alone and all will be well. It won’t. Haiti needs more engagement with the international community, not less.
Posted by Anastasia F-B at 16:29