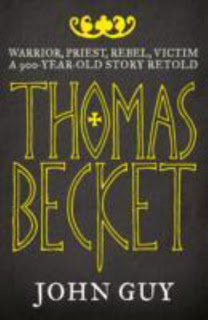 Kings can be dangerous and uncertain friends.  Thomas More, Lord Chancellor under Henry VIII, knew as much.  A close political and personal adviser to the king, he harboured no illusions about their relationship, telling Will Roper, his son-in-law, that “If my head would win him a castle in , it should not fail to fall.”   His head did fall, though not over a castle in .  So, too, in a way, did the head of Thomas Becket, the martyr Archbishop of Canterbury, who was murdered for defying the will of Henry II, his one time mentor.

There is an interesting parallel between the two commoners and the two kings, close collaborators distanced by politics and circumstances.  Becket’s death secured those very privileges and legal exemptions for the church from the general course of common law that Henry had been anxious to end.  His martyrdom marked a - temporary - victory of the sacred over the secular power.

More’s martyrdom, in contrast, came at the height of a political and clerical revolution that saw the church firmly subordinated to the power of the state.  To confirm the new realities, Henry had Becket’s shrine at , long the most important pilgrimage site in , destroyed.  He was no saint, the king had decreed, “but a rebel and traitor to his prince.”  His namesake and medieval predecessor would doubtless have agreed.

Here we have Thomas Becket in the round, a martyr for one season and a rebel for another; saint and sinner in one. This year is the eight hundred and fiftieth anniversary of the elevation to the see of , an occasion marked with the publication of Thomas Becket: Warrior, Priest, Rebel, Victim by John Guy.  Others have traced these steps before him, not just in biography and history but also in drama, poetry and film.  Becket, to use what is now rather a hackneyed expression, truly is a man for all seasons.

Guy, a specialist in Tudor history, has created a man for our season in a lucid and balanced life of one of England's greatest churchmen.  He is to be commended because it’s not that easy to find a ‘via media’ with Becket. So much of the material that followed the infamous 1170 murder in the cathedral is hagiography, to be treated with considerable caution.  But Guy builds up an entirely plausible picture with all of the balance and skill of a good historian.

His is a tale of an odd couple - the brutal and domineering Angevin king and the scholarly and principled commoner.  This was never a relationship of equals.  Henry saw in Becket a useful tool, a man who had performed a commendable administrative role as Chancellor, an office he made uniquely his own.  So impressed was the King that he immediately appointed Becket as Archbishop of Canterbury on the death Theobald, though he wasn’t even a priest at the time.

Soon after came the deluge.  Without even telling the King, who expected him to combine both offices, Becket immediately resigned the Chancellorship.  A great layman was set to become a great churchman.  Most have seen this as the key moment in the evolving relationship between the two men, as if Becket experienced a kind of epiphany, a revelation on the road to , taking him from one set of attitudes to quite the opposite.  But Guy shows that there was no sudden transformation in Becket’s character; that, even at his most worldly, he had always carried deep reservoirs of inner piety, that he had principles bordering on stubbornness.

Rather surprisingly, considering that he had been so close to the centre of power, he lacked political subtlety, the real key to his downfall.  There have to be real questions also about the true nature of the friendship between him and the king.  They could enjoy field sports together, but neither man seems to have fully understood the other.  Supporting the sovereignty of the crown at one moment and the sovereignty of the church at the next, Becket embarked on a course of action with a surprising aggressiveness. Henry was not an easy man to play, but a gentler course might have yielded better results.

But, then, perhaps martyrdom was the ultimate gaol, the ultimate political gesture.  It certainly secured the ‘liberty’ of the church for centuries after the Archbishop’s death, until another Henry appeared.  Becket, as a saint, may have been a heavenly success but in the long run his cause was an earthly failure.  Even Charles I, the only Anglican martyr, who also sacrificed himself on a point of religious principle, considered him a traitor.

Generally speaking Guy provides us with a well-crafted analysis of a clash between two giant personalities, all against a wider political clash between church and state.  Weakness comes, where all weaknesses come, when he departs from the record into the misty marshes of psychological speculation. His attribution of Becket’s “insecurity of temperament” to his “closeness to his mother as a child” strikes me as so much psycho-padding and hogwash.  There is also, I have to say, a laziness in his prose style at points, places where he overdraws in the bank of cliché.  Expressions like ‘baptism of fire’, ‘getting into a tight corner’ and ‘vibrant social scene’ really do gall.

Still, my carping notwithstanding, this is a solid account of a fascinating life and interesting times.  I think the author has done a commendable job in uncovering the man underneath the halo, though perhaps at the expense of his royal master; as the one magnifies the other seems to diminish. Bullying and brutal he may have been, but Henry was simply trying to redress a balance, strengthening a state that had lost so much ground during the Anarchy of Stephen and Matilda.  An over-mighty church was as bad as an over-mighty subject.  Becket, the great commoner, had the misfortune to combine both dangers.  He was the most turbulent priest in our history.