Athos and the Third Rome 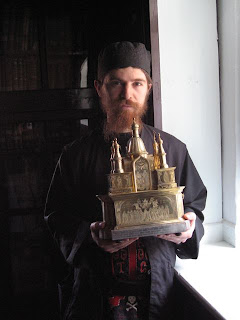 I had never heard of the Theocratic Republic of Athos until recently. If you have never heard of it either it’s to be found on the easternmost prong of the trident-like peninsula that projects from northern Greece into the Aegean Sea.

Oh, I knew that Athos was the host to a community of Orthodox monasteries, Russian, Bulgarian and Serbian as well as Greek. I also knew that is a place closed to women. What I was unaware of was its unique political status as a self-governing though not independent entity. But what makes it of particular and topical interest is that it now stands at the centre of a religious struggle, one that largely seems to have escaped attention in the non-Orthodox World, a struggle that opens the door to the ghosts of vanished empires.

In an article in the April edition of the BBC History Magazine, David Keys says that Athos, the Holy Mountain, as the Greeks refer to it, might be considered as the last surviving remnant of the Roman Empire. It was given its status by the Byzantine emperor Basil I in 885, as a monastic territory within the Empire. This unique identity was preserved through the long centuries of Ottoman occupation.

Although the monks finally accepted the sovereignty of the emerging Greek state, Athos was formally recognised in the national constitution of 1926 as a self-governing theocratic republic, officially known as the Autonomous Monastic State of the Holy Mountain. On spiritual matters the territory comes under the supervision of the Eastern Orthodox Patriarch of Constantinople, long resident in Turkish Istanbul.

If you think that things can’t get any more complicated they do! Just as Greece is struggling for its political soul with Germany, there is a struggle for the Orthodox soul with Russia. Remember Athos is an international community representing the whole of the Orthodox world. There were points during the last century when the majority of monks were Russian, though the Greek government has since restricted a non-Greek presence.

So far so nothing, and Athos might have continued to slumber in spiritual isolation, but for one thing…some of the monks are getting a bit bolshie! Recently two of the peninsula’s twenty monasteries have been in trouble with the police. Why? Because they are refusing to pray for the Patriarch. The implication here is that he has no spiritual authority over them, a violation not only of church hierarchy but also a violation of the 1926 constitution.

Things have been taken to the point where the police have been trying to expel the monks of the tenth century Esphigmenou monastery. In another case Abbot Ephraim of the tenth century Vatopedi monastery has been arrested as part of a corruption scandal. But the dissidents have a champion. Turn now and look to the Third Rome. Abbot Ephraim has become an icon in Moscow!

It was after the fall of Constantinople, the second Rome, to the Turks in 1453 that the title began to settle on Muscovy, with the clear implication that Russia was now the centre of the Orthodox world. “Two Romes have fallen. The third stands. There will be no forth.”

The Third Rome did fall, or rather was eclipsed for decades by the communists. But the demise of the Soviet Union has seen a remarkable revival of the Orthodox Church. In the years since Gorbachev’s Christmas Day farewell 25000 new churches have been built. Today some seventy per cent of the world’s Orthodox community live in Russia and the Ukraine. A new vibrancy has brought with it a new assertiveness, with Moscow seeking primacy over Constantinople.

Ephraim is particularly prized. Last year he allowed a textile belt said to have been worn by the Virgin Mary, one of Athos’ most sacred relics, to leave Greece for the first time ever. It went with him on a tour of Russia, where it was seen by an estimated three million people, some of whom queued for twenty hours. By sheer coincidence (of course it was) Ephraim was arrested soon after his return with the belt, something that could not have happened, as Keys writes, without the tacit neutrality or agreement of the Constantinople Patriarch.

Actually the ramifications here are even wider. The whole question has been caught up in a new cold war between Russia and America. Unbeknown to me, Washington regards support for the Patriarch as an important part of its foreign policy. Over the past few years he has been visited in Istanbul by Vice-President Joe Biden and Secretary of State Hilary Clinton, just to bolster the old chap over his Moscow rival. The Greeks, increasingly worried about their own identity, are no less anxious to secure this ancient link and their pre-eminence in the Orthodox universe.

The trouble is, given his position in a Muslim country, the Constantinople Patriarch, once as powerful as the Pope in Rome, is an isolated figure. Successive patriarchs were really only able to preserve a primacy paradoxically thanks to the persecution the Russian Orthodox suffered at the hands of the communists. Now the Russian Church wants to give proper meaning to the concept of the Third Rome, many seeing Moscow as the rightful successor to the Byzantine patriarchy.

How did the Autonomous Republic get caught up in this, you may wonder? Simply this: it’s a traditionally conservative community and many of the monks, not just in the foundations I’ve mentioned, are openly critical of the Constantinople patriarchate, which they see as too ecumenical and too liberal. Alienation from Constantinople has entailed admiration of Moscow and the renaissance of Russian Orthodoxy.

To complicate things one stage further (yes, I know, I know!) the Republic is also in conflict with the European Parliament, which is calling for the thousand-year-old ban on the entry of women into the celibate community to be ended. Just how much ‘autonomy’ the Autonomous Republic truly has is clearly open to question. Come to that, just how much autonomy any of us have, religious or not, is also open to question. Turkey swallows the Patriarch; Greece swallows Athos; Europe swallows Greece. Perhaps the only independence left is to be found in the Third Rome. What a depressing thought to conclude with.
Posted by Anastasia F-B at 16:40