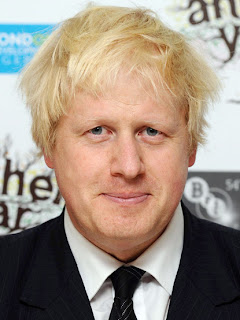 When I was eighteen I wrote to Boris Johnson, the present mayor of .  He was then shadow Minister of the Arts in the front bench team of Michael Howard, the Conservative Leader of the Opposition.

Johnson was also at the time the editor of the Spectator, a weekly political magazine that I’ve been reading since my early schooldays.  It was on his watch that an editorial appeared criticising the people of Liverpool for displays of ‘mawkish sentimentality’ over the death in of a prominent local figure.  They were also accused of wallowing in a ‘vicarious victimhood.’  Howard, in overreacting to the ensuing squeals of protest, ordered Johnson to make a personal pilgrimage to , draped in metaphorical sackcloth and ashes, offering a humiliating public apology.

It all seemed so ludicrous to me.  In my letter I said that it called to mind the Holy Roman Emperor Henry IV, who had to journey to the fortress of Canossa in northern , there to abase himself before Pope Gregory VII. Poor Emperor Boris; he had ‘nach gehen.’

This coming Thursday, 3 May, he is standing for re-election in the mayoral contest, with Ken Livingstone, the former Labour incumbent, the main challenger.  I loath Livingstone, a sleazy, self-regarding and unpleasant little man, a friend of backward Muslim clerics, which is reason enough to support Boris.  But setting the negativity to one side, there are so many solid reasons why BJ is the man for .  I’ll come on to these in a bit but first ecce homo – look at the man and the enormous difficulties he faces.

I have no doubt that Boris is not just the most important Conservative in but in as a whole.  As David Cameron’s star wanes Boris’s waxes.  Though not in the government, he has a recognition factor that most front bench ministers would envy.  He’s also hugely popular and I have little doubt that in normal circumstances he would be a shoo-in on Thursday.  But these are not normal circumstances; Boris is swimming against the tide. Shifty Ken has one major advantage; Cameron and George Osborne, the Chancellor, have been batting on his side.

With the present government it’s been disaster after disaster, not least with Osborne’s botched budget.  With the tide of opinion moving heavily against the Conservatives, Boris may drown in an electoral tsunami; he may go under in a deluge of political factors over which he has no control.  The copy gets worse day by day.  No sooner had the government announced that it had loaned a further £10billion to the IMF than even deeper cuts in domestic spending were revealed. With friends like these who the hell needs enemies?

Writing in the latest issue of the Spectator Fraser Nelson reminds us just exactly what Boris has done for and Londoners.  His 8000 ‘Boris bikes’ have been taken on no fewer than ten million rides.  Altogether the city is a much more cyclist-friendly place than it was when I was in my teens (I never dreamed then of negotiating the many hazards on my bike!).  Under the watchful eye of our dear Gauleiter there has been a ten per cent reduction in street crime.  The Greater London Authority Tax has been frozen, saving the average Londoner a cumulative £445.  Boris has pledged to reduce it by a further ten per cent if re-elected.  All this and Boris bikes; what more could one ask for?!

But, as I say, he is swimming against a particularly strong current.  With George Galloway, Britain’s number one Islamist, out campaigning for Livingstone, it’s clear that there is a cynical attempt to play the Muslim card in the same fashion as the recent Bradford East by-election.

Nelson concludes his piece as follows;

The Mayor matters because he represents a certain strand of Conservatism, unashamed about Tory principles and unafraid of making unpopular arguments. His Toryism is one of tax cuts, standing up for British bankers and defying the European Union when it threatens our prosperity. Boris embodies the rejection of the Blair/Clinton ‘triangulation’ politics, where the least offensive politician is deemed the most successful.

This election was always about more than just . It is about how we do politics, who fights and who wins. Over the last 20 years, our politics has been reduced into a battle for swing voters in swing seats. This has led our political class in a certain direction, directed by the sat-navs of the opinion polls and focus groups. Boris has defiantly set off in another direction, guided by instinct and brio. And this is why his victory matters so much.

Indeed it does.  I’m campaigning for Boris; I’m persuading as many people as I can to support Boris; I shall be voting on Thursday for Boris.  You see, I love Boris, just as I love .