Enemy at the Gate 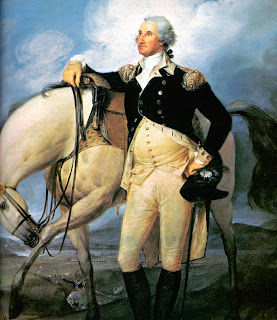 Who was Britain’s greatest enemy? The answer, according to a poll carried out by the National Army Museum in Chelsea, is George Washington, or at least he was according to a panel of seventy invited guests. All attended an event at the Museum on Saturday, in which a short list of five was considered, each case argued by a historian before a vote was taken.

The others on the list included Michael Collins, the Irish Republican leader, who came second, Napoleon Bonaparte, Erwin Rommel and Kemal Ataturk. In case you are wondering why no Hitler all had to have led armies against the British in the field, which excluded purely political enemies.

All great fun, I’m sure, and I’m rather sorry I was not there among the guests. The five commanders selected came from a broader list of twenty drawn up by the museum’s curators. To qualify for inclusion all had to come from the seventeenth century onwards. Michael Collins is a bit of an oddity, in that he was a guerrilla leader who never commanded an army in the field.

The event itself was preceded by an online poll on the Museum’s website, launched in February. Rather predictably, I suppose, Collins attracted a wave of support around St Patrick’s Day in March. Wider and wider went the net, with the Turkish media picking up on the inclusion of Ataturk, a great national hero. All at once the battle lines were drawn, with the Turk advancing fast on a wave of national pride. Fighting a new Gallipoli, he won comfortably, with 40% of the votes cast. Poor old George came forth, with less than two percent of the vote, alas another Battle of Long Island!

Ah, but the Museum’s strategists were alert to the danger of tactical voting along national lines, hence the final and secret poll. Before making up their minds, the select band focused on a specific set of criteria, not my hero is bigger than your hero, Turkish pride greater than Irish, but performance in battle.

Thinking of the five in question it seems to me to be a rather odd collection. In terms of battlefield performance I have no objection to Washington if the focus was specifically on great commanders, but he was hardly a great enemy in the way that Napoleon was a great enemy, and by that I mean a threat to our national existence.

I admire Washington, a political conservative as well as a skilled commander, as much as I despise the little Corsican upstart, who tore Europe apart in the pursuit of personal ambition. That he was trumped by Michael Collins, of all people, is a demonstration either of the skill of the historian who presented the case or the historical incomprehension of the audience.

The wider list, those who did not make it to the final poll, seems to me to be both eclectic and eccentric. There was Laksmi Bai, the Rani of Jhansi, the token woman, who was prominent in her opposition to the British during the Indian Mutiny. She may be another symbol of national pride but she can hardly be described as a great enemy or a great commander. There was Ntshingwayo kaMahole, the Zulu leader who won the Battle of Isandlawana in 1879, in the long run of things no more than a little local difficulty.

But, my goodness, where was Michiel de Ruyter, the seventeenth century Dutch admiral who lead the Raid on the Medway, an event I’ve described as a kind of English Pearl Harbor. I would even put Bonnie Prince Charlie or, to be more exact, Lord George Murray, above Ntshingwayo kaMahole…or even Michael Collins! Still, I’m sure an entertaining day was had by all, even by those with a less than perfect grasp of history, which would seem to include the Museum’s landlubber curators.
Posted by Anastasia F-B at 16:20