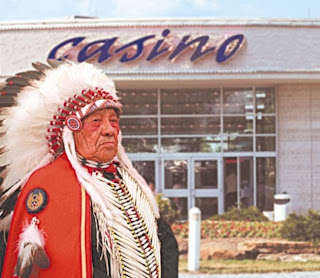 I love fascinating discoveries, just as I love surprises. I was both fascinated and surprised to learn that the American constitution recognises three sovereign entities: the federal government, the individual states and – this is the surprise – the Indian tribes. Yes, the Indian nations are effectively that – nations.

Clearly these sovereignties are not equal. The Civil War showed that federal authority trumped that of states’ rights. The position with the Indians – I refuse to use the term ‘native American’ – seems to be more ambiguous. Their legal status rests on the various treaties signed in the past with the federal government, bargains which were often just made to be broken.

Though one-sided these deals, when they were not breached, allowed the Indians a certain amount of leeway. They could not raise armies or create a separate currency, but they enjoyed the kind of rights normally exercised by fully sovereign nations, including the right to issue passports.

The right to issue passports is one thing; having them recognised quite another. The Iroquois have their own passports but they have no international recognition, as their lacrosse team discovered when it was refused entry into Britain in 2010. But, my goodness, they take their national rights seriously, even separately declaring war on Germany in 1941, as did the Sioux and some other tribes.

It’s actually only in fairly recent times that the supposed rights of the various Indian nations carried any weight at all. The treaties concluded with the government in the nineteenth century were really ‘bad faith bargains’, ignored when it was convenient to ignore them, especially if it was discovered that the territories allotted to the tribes were subsequently discovered to have hidden value. It was not a relationship of equals. The treaties were most often a way of diminishing native rights by removing them into ever more marginal land, a policy of ghettoisation, which in some ways recalls the ‘homelands’ created by the old apartheid state of South Africa.

These ‘red ghettos’, as one Indian author described them, effectively became rural slums, noted more for poverty, unemployment, alcoholism and crime than the preservation of traditional values. These so-called sovereign nations were really no more than federal dependencies, overseen by the Bureau of Indian Affairs. A change of attitude came in 1934 when Congress endorsed a degree of self rule, though – amazingly – it wasn’t until the late 1970s that the persecution of traditional religious practices was ended with the passing of the American Indian Religious Freedom Act.

That same decade the bogus treaties of the past were given real legal substance with the adoption of the Indian Self-Determination Act, beginning the transfer of administrative authority from the Bureau of Indian Affairs to the various tribal governments. So what did this mean in practice, what innovations did it bring? Buffalo hunting may have been out but the hunting for punters was in! The business of America may be business but the business of the Indian nations is gambling.

There is another parallel here with the South African homelands, where supposedly independent entities made money through gaming, free of restrictions applied elsewhere. Indian independence, such as it is, has been built in the modern age on the roulette wheel and the slot machine. When early attempts at gaming on reservations came into conflict with state law the matter went as high as the Supreme Court, which in 1987 decided that the tribes, as sovereign entities, could not be barred from running casinos and other gambling facilities. This was followed by an act of Congress which specifically allowed Indian gambling, provided that the proceeds were used for “tribal economic development.”

Now, according to a report I read in the Economist, the various Indian gaming houses take up to 44% of America’s total gambling revenue. Almost half of the tribes across the land have taken advantage of the opportunity, not hunting bucks but making bucks. The key to success or failure here is location: the closer to major population centres the better things are. White settlers in the nineteenth century may not have been welcome; white gamblers in the twenty-first most definitely are.

According to David Wilkins, professor of American Indian Studies at the University of Minnesota, gambling has become the biggest economic boost to the tribes since the fur trade in the nineteenth century. The results, though, seem to be mixed. There have been some positive benefits in “tribal economic development” when the proceeds are spent wisely, which, sad to say, is not always the case.

In some reservations profits, shared out as dividends, are little better than doles, reinforcing a culture of dependency. It has also led to a form of racial discrimination which would be shocking if practiced elsewhere in America. Some tribes have adopted ‘blood quantum’ laws, obliging an individual to prove his genetic antecedents. More than that, thousands have been disenrolled from tribal membership because of doubts over their ancestry. Gaming, or the profits of gaming, is clearly in the blood.

In times gone by the more braves the greater the power. In times present the fewer braves the bigger the pot. For those unfortunate enough to full victim to greed or simple spite the results are fairly dire. The loss of guaranteed revenue is bad enough but what makes it worse is the potential loss of tribal housing, education, welfare and other benefits. Beyond that it entails a compete loss of community and identity.

The whole thing seems quite invidious. But there are bigger questions over the true benefits that gaming has brought to the tribes. Unemployment on the reservations is still eye-wateringly high. Drug and alcohol abuse are both endemic problems, as is obesity and diabetes. Crime rates are twice the national average. For a great many of the people locked into these ‘sovereign nations’ life itself would seem to a game, one in which the odds are not very favourable.
Posted by Anastasia F-B at 16:02