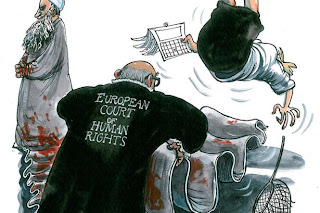 A pocket cartoon in last Thursday’s Times just about sums things it up.  There is God, sitting on his heavenly throne, holding a document in his hand.  Turning to an angel he says “Apparently, casting out Satan breaches his inhuman rights.”

This comes after the latest attempt to cast out that devil Abu Qatada was blocked by the European Court of Human Rights (ECHR).  The whole thing is a comedy of errors, involving the Home Office and arguments over deadlines for appeals, except it’s a comedy without much in the way of humour.

Theresa May, the hapless Home Secretary, was under the impression that the deadline for an appeal had passed last Monday.  Oh, no, it hadn’t, came the cry from the European wing, as the legal pantomime got ever more ludicrous, it was Tuesday.  Poor Hamlet, on the threshold of self-destruction, musing about the law’s delay and the insolence of office, did not know the half of it!

The Times was clearly frustrated judging by the headline across the front page.  ’s court jesters, it stamped.  Prime Minister David Cameron is also frustrated, vowing to force Qatada out of the country, “no matter how difficult”.  The entire government is clear, he went on, that this man has no right to be here.  “I sometimes wish I could put him on a plane and take him to myself.”

All this comes on the eve of a conference intended to curb the court’s influence on after a series of controversial rulings.  Yes, yes: more jaw jaw and no war war.  You can have many conferences as you like, says Nicolas Dušan Bratza, it’s not going to change a thing.

Who is Nicolas Dušan Bratza, you may wonder?  Actually it’s Sir Nicolas Dušan Bratza, who just happens to be the British judge who now heads the ECHR.  I know, he sounds about as British as ; for it is from whence this man descended upon us, or rather his father did.  There he is now in his lair, no better example of the law’s delay and the insolence of office.

The Abu Qatada farce is clearly shaping up to be a new version of Jarndyce and Jarndyce, the interminable legal process from Charles Dickens’ novel Bleak House.  That case was relatively benign, though, with the law simply serving its own ends.  Now the ECHR serves the ends of criminals, who make use of its interminable delays to evade justice.  As the Times said in its leader, the court is being played by defendants to string out the time in which nothing, in effect, happens.

I have another literary reference in mind, one of my favourite passages from in Wonderland.  There is in conversation with the grinning Cheshire Cat;

We must be mad, literary mad, as a nation ever to have subjected ourselves to this foreign legal authority, even one headed by such a patriotic Englishman as Nicolas Dušan Bratza.  Personally, unlike Cameron, who only talks in his inimitable impotent fashion, I would send Qatada to Jordan, Strasbourg to hell and Nicolas Dušan Bratza to the land of his ancestors for a good long rest.
Posted by Anastasia F-B at 16:22