The Resistible Rise of George Galloway 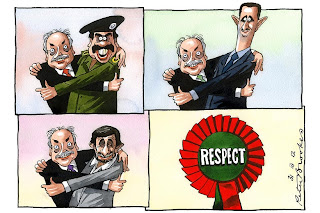 I don’t suppose too many people in the States or, indeed, the rest of the world, take an awful lot of interest in British electoral politics. It may therefore have escaped your attention that we had minor earthquake here last week: a by-election in the constituency of Bradford West in the north of England, won by a certain George Galloway, an outsider standing for the British Respect Party (BRP).

He did not just win; he drubbed his opponents, particularly the Labour Party, widely expected to retain a seat it has held for almost forty years. His unexpected victory was, according to him, the ‘Bradford Spring’, a clear analogy to developments elsewhere in the world.

Some Americans may be familiar with Galloway. If so, it’s most likely because of his appearance in 2005 before the US Senate sub-committee investigating improprieties in the Oil-for-Food programme, set up before the 2003 invasion of Iraq as a way of circumventing sanctions with humanitarian aid.

For those who are not familiar with him and all his works let me just say that he is the sort of politician who will use all weapons to hand, sharp or blunt, in his relentless scramble for publicity. There is not much in the way of gravitas or dignity about him. He once appeared on a celebrity version of Big Brother, meowing like a cat while licking milk from a woman’s hand at one point, at another dressed in a tight leotard which clearly showed that, as a politician, he really does have balls. Most of all he is an opportunist, a self-aggrandising, vain, bombastic and vulgar little man, one who cynically exploits people in his unending attempts to secure GGG – the Greater Good of George. 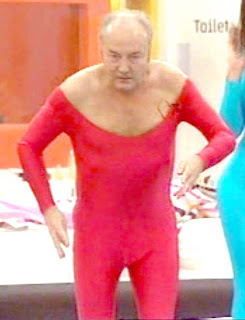 This man, who once saluted the ‘indefatigability’ of Saddam Hussein, is well-known in the Muslim world, and the Muslim world includes Bradford. The town contains a higher than average proportion of people from Pakistan, a fact that Galloway exploited with ruthless cynicism, not stopping short of the manipulation of faith for political ends.

So let’s have a look at events leading up to the ‘Bradford Spring’, let’s have a look at the kind of campaign Galloway fought; let’s, in the process, have a closer look at his character. So far as he has any faith at all I understand that he is Catholic by upbringing. Oh, no he is not; he is a Muslim, or so he hinted to the Bradford masses. At a campaign rally held on the weekend just prior to the poll he said;

I’m a better Pakistani than he [Imran Hussain, his Labour Party opponent] will ever be. God knows who’s a Muslim and who is not. And a man that’s never out of the pub shouldn’t be going around telling people you should vote for him because he’s a Muslim. A Muslim is ready to go to the US Senate, as I did, and to their face call them murderers, liars, thieves and criminals. A Muslim is somebody who’s not afraid of earthly power but who fears only the Judgment Day. I’m ready for that, I’m working for that and it’s the only thing I fear.

Yes God knows who is a Muslim and who is not, but does George? God also knows that the accusation against Hussain, who does not drink, is a gross libel, but gross libel is nothing set against the grossness of Galloway, a man who, as one English journalist put it, fought a campaign on the naked invocation of race and faith.

“All praise be to Allah”, he announced after the result. Yes, indeed, Allah was by his side, always on the watch for deviation, keeping an eye out for any who dared to vote for another candidate. If they did, George the pseudo prophet warned, they would have to face Him on Judgement Day.

At rally after rally Galloway hammered home the same message, how “Western imperialists” were killing “millions of Muslims.” With the big message of naked and ugly sectarianism came the small message of faith – he is in favour of the banning of alcohol. In point of fact that’s rather a relief, as the Respect wave is likely to break on the dry shores of Bradford!

As always with Galloway, by his friends shall ye know him. At his main rally he was supported by Abjol Miah, a leading figure in both Respect and the Islamic Forum for Europe (IFE), an extremist organisation which wants the creation of a sharia state in Europe. Also on board was the Muslim Public Affairs Committee (MPAC), a group which previously campaigned against a Labour Member of Parliament for being “Jewish” (she wasn’t, not that it matters).

Well, there is really no surprise in any of this, no surprise from Galloway, a man who praises Hamas and reports for Iranian state television. This is a man, I should add, who was once a Labour MP, a man who identifies with socialist causes, or at least used to. How far the left has degenerated, how far it continues to degenerate into ever deeper levels of moral dissimulation and intellectual corruption, as it associates with some of the most reactionary forces on earth.

The irony is that the poll showed there was serious voter alienation from all of the main political parties, Conservative and Liberal Democrat as well as Labour. Non-Muslims also appear to have voted for Galloway.

In the long run by-elections, no matter how important at the time, never really amount to much, just blips on the radar. This one could have been different, could have shaken the complacency of Westminster. As Andrew Gilligan wrote in the Telegraph, it’s a shame that it has been so thoroughly contaminated by the politics of religion. Contaminated also, I would add, by lies and naked demagoguery. Our democratic culture is the lesser for this shabby hypocrite’s ascent. For him I have absolutely no respect.
Posted by Anastasia F-B at 16:39