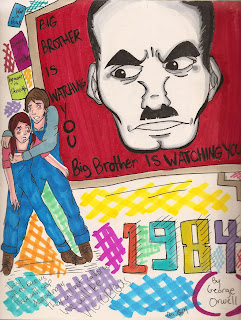 These are the words with which Winston Smith opens his journal in George Orwell’s novel Nineteen Eighty-Four. I begin to worry that at some time in the near future I may have to open my own secret channel of communication, because our benighted government is proposing to monitor the email and phone calls of all private citizens.

It’s a Frankenstein Monster the previous Labour government unsuccessfully tried to electrify into life six years ago. Now it has been brought out of the crypt. David Davis, the soul of the Conservative Party, at least has the wit to see what Prime Minister David Cameron cannot: this is going to cause a huge amount of resentment. The idea of it, the idea that we will be subject to levels of state intrusion more common in places like Iran or China, simply makes my blood boil.

Although the new proposals, to be introduced in the next session of Parliament, do not include a national database, something the Labour government was keen on, internet service providers will be required to record all online activity, to be accessed on demand. It would be a dream for the likes of G Gordon Liddy and all such petty snoopers. Hey, there is no need to burgle Watergate; we have all the information we want at our electronic fingertips!

This comes, I should add, in the face of a previous promise by our benighted Coalition government to end the storage of internet and email records without good reason. So why the reversal, why this descent into super snooping? It’s a way, goes the official line, of combating terrorist and paedophile networks. In other words, it makes potential terrorists and paedophiles of us all.

Shami Chakrabarti, director of Liberty, a civil rights group, reminds us that the Conservatives and Liberal Democrats were active in their opposition to Labour’s 2006 proposals. “There is an element of whoever you vote for the empire strikes back”, she said. “This is more ambitious than anything that’s gone before. It’s a pretty drastic step in a democracy.”

Not only that but it seems to me to be particularly stupid blunt instrument, and I imagine a massively expensive one. Crime and terrorism need to be fought but in a targeted fashion, not by this kind of idiotic mass surveillance. My confidence in this wretched government diminishes by the day, Conservatives who are not conservatives, Liberals who are anything but liberal.

I do not suppose for a moment that Big Brother seriously wants to monitor Ana’s emails or phone calls, but the very idea that he might is deplorable. We will simply never know if we are being watched or not. Our freedom, once again, will be diminished, our ancient liberties further undermined. The terrorists who seek to destroy our civic tradition must be delighted. Their work is being done for them by stupid politicians and power mad bureaucrats.

I wrote this last night in a passion. The latest information I have is that the U has been turned; that the absurd Theresa May, the Home Secretary, has been hoist with her own petard; that Nick Clegg, the deputy prime minister, has said that the legislation will only be published as a ‘draft’, which means it will be ignored as daft. My goodness, how true it is: those whom the gods wish to destroy they first make ridiculous!
Posted by Anastasia F-B at 16:20