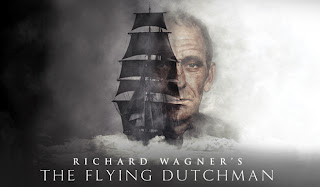 My boyfriend has tickets for a new production of Wagner’s The Flying Dutchman, which premiers at the London Coliseum, the home of the English National Opera, towards the end of the month. He has contacts with the company, so were kindly allowed to attend a recent rehearsal. I can tell you that it’s all looking good!

I confess that I’m not massively keen of the German master’s ponderously Teutonic total art works. I saw Parsifal last year in the same theatre. I’d heard some extracts before but that was my first full performance. What can I say, other than it’s deeply depressive, almost as depressive as Tristan and Isolde! There is such a negative, life-denying quality to Wagner’s philosophy. I can only agree with Nietzsche, who in Der Fall Wagner – The Wagner Case – contrasted his work with that of George Bizet, contrasted gloomy northern bogs with southern light and sun!

The Flying Dutchman is different, though, because it is one of Wagner’s early operas, written at a time when he hadn’t been completely seduced by his own mythos. Compared with Tristan and Parsifal, those knights of gloomy countenance, it has a much lighter touch with some really super arias. I love the choruses too. I think the Spinning Chorus quite wonderful as is Steuermann, laß die wacht, during which the Norwegian sailors call for the Dutch crew in the silent and ghostly ship to come and join them. They end by rather wishing that they had kept silent themselves!

Thinking beyond the opera, the legend itself has long intrigued me, the story of a cursed ship and crew, condemned to sail the oceans forever. The origin is uncertain, but it seems to have appeared for the first time in the seventeenth century, though possibly of much older provenance in the bowels of nautical folklore. It’s first mentioned in print in A Voyage to Botany Bay, published in 1795, in which the author says;

I had often heard of the superstition of sailors respecting apparitions, but had never given much credit to the report; it seems that some years since a Dutch man of war was lost off the Cape of Good Hope, and every soul on board perished; her consort weathered the gale, and arrived soon after at the Cape. Having refitted, and returning to Europe, they were assailed by a violent tempest nearly in the same latitude. In the night watch some of the people saw, or imagined they saw, a vessel standing for them under a press of sail, as though she would run them down: one in particular affirmed it was the ship that had foundered in the former gale, and that it must certainly be her, or the apparition of her; but on its clearing up, the object, a dark thick cloud, disappeared. Nothing could do away the idea of this phenomenon on the minds of the sailors; and, on their relating the circumstances when they arrived in port, the story spread like wild-fire, and the supposed phantom was called the Flying Dutchman. From the Dutch the English seamen got the infatuation, and there are very few Indiamen, but what has some one on board, who pretends to have seen the apparition.

The tale of a ghost ship was then laced with a curse, though the reason for its particular doom is uncertain. All sorts of macabre layers were added by successive authors, to the point where we have a story of a captain, struggling to round the Cape of Good Hope in a storm. Refusing to go into harbour for the night he said “May I be eternally damned if I do, though I should beat about here till the Day of Judgment.” Thereby he spoke his own doom!

For the Dutchman there is no hope at Good Hope. It was Heinrich Heine who threw in the possibility of redemption in The Memoirs of Mister von Schnabelewopski, a satirical novel published in 1833. In this he allows the captain to come ashore every seven years to seek true love, thereby finding salvation in the devotion of a woman. This was the spin that inspired Wagner’s own romantic adaptation in the story of the Dutchman and Senta, the one woman who finally proves to be true, even unto death. It’s rather ironic considering that Heine was a Jew and Wagner a notorious anti-Semite!

Yes, OK, there is, like Tristan and Isolde, another ‘love death’ here. But the sacrifice of Senta seems much more human, altogether far, far less tortuous. The whole thing appeals to my romantic sensibilities. Seduced and deluded I may be, but I like to console myself with notions of love greater than death.

So, all in all, I’m quite looking forward to seeing and hearing it in it's full glory, with James Creswell as the Dutchman, and Orla Boyan as Senta, his one true love. I feel certain that it will be a memorable evening. Afterwards we shall have an intimate supper for two, a return to less ethereal forms of romance. You see, unlike Senta, I’m not thinking of throwing myself off a headland…not just yet awhile. :-)