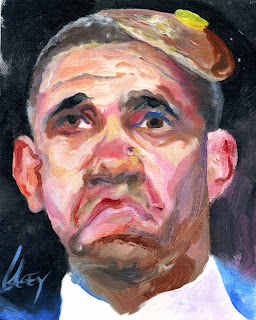 I said in discussion recently that Barack Obama’s slogan for the coming Presidential election should be “No, I can’t”, a more honest and apt statement about him as a man, a leader and a chief executive than “Yes, we can.”

There was something else I said, that if a play is ever written about his time in the White House it really should be called The Death of a Salesman. It’s such a pity that it’s already been done. But I wasn’t actually thinking of Obama in the guise of Arthur Miller’s Willy Loman. It’s another salesman I had in mind – Samuel Bick from the movie The Assassination of Richard Nixon.

This is a movie about personal drift and decline that I saw last year on DVD, with Bick drifting in ever faster eddies, a yacht without a compass or a rudder. Bick is a salesman in a furniture store, not a very good one, diffident and lacking in self-assurance. His boss tries to motivate him in various ways, pointing to the then President Richard Nixon as an example of the perfect salesman. Why? Because in the Presidential election of 1968 he sold America the idea of ending the war in Vietnam and then failed to deliver. Nothing deterred, he sold exactly the same idea in 1972. Bick, in an increasing mood of despair, then takes Nixon as the avatar for all that is wrong in his life.

Obama is far more like Bick than Nixon. He tries so hard to be a salesman, tried to sell the idea that all that mattered was positive thinking. Time and again he has shown that it doesn’t. As his abysmal presidency, in so many ways the worst in American history, drifts from one nadir to another, he flails around, looking for scapegoats and excuses, looking for his own personal Richard Nixon, if I can put it like that, as an explanation for his failure

The Committee to Encourage Corporate Philanthropy, a research body which monitors corporate giving trends, reporting from a database of 184 companies that corporate giving has increased by 53% since 2007, not at all bad in the midst of one of the most serious recessions since the 1930s. The total contributions across all respondents in cash and products amounts to more than $15.5billion. The biggest increase of all has been among companies working in the healthcare sector.

There are individuals like Mark Zuckerberg, Mr Facebook himself, who has contributed $100 million to create a better grading system in public schools. And then there is the financier Toby Forstman, who responded to America’s failing education system by setting up the Children’s Scholarship Fund, a programme that so far has provided scholarships to the value of $483million for thousands of low-income children to get into private schools. In foreign aid programmes the state now provides a mere 15%, the balance coming from private capital.

As Roberts says in his article, this is the ‘can do’ attitude that built America in the first place. Get the state out of the way, and then see what happens. This is yes, we can, in sharp contrast to Obama’s no, I can’t, and I never could. All he sells is hot air, big, windy meaningless speeches.

In 2008 many greeted Obama as a new Lincoln, the same grand words, the same lofty vision. In reality he has turned out to be more in the image of Franklin Pierce or James Buchanan. Yes, the fact that many of you probably now have to pop over to Wikipedia is a measure of how little trace they have left, a measure of their mediocrity. In generations to come other people, I suspect, will have to do the same for Obama.
Posted by Anastasia F-B at 16:08