The House of European Lies 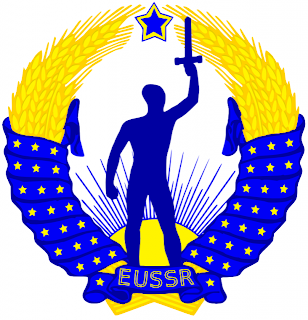 When did European history begin, do you think? It’s not so easy to answer, is it? There are a number of points of departure. We could, I suppose, alight on Bronze Age Greece, recalled in the epics of Homer. It's as good a starting point as any. Wrong! European history began in 1946! Yes, it did, at least it did according to the idiots behind the House of European History, a massively expensive vanity project being promoted by the European Parliament.

European history began in 1946. When I read about this in the press recently not only could I not stop laughing but Annus Mirabilis immediately came to mind, a poem by Philip Larkin which opens with the following verse;

European history began in nineteen forty-six (which is rather late for me) between the end of World War Two and the rise of Sarkozeee!

So, why 1946, you may wonder? Simply because the various governments that make up the EU can’t agree on what went before. They can’t agree, above all, on the course of the Second World War, which among enthusiasts is risibly referred to as the ‘European Civil War.’ Ah, yes, the ‘European Civil War’ in which the Americans, the Russians (not all Europeans), the Canadians, the Australians and many other non-European nations were silly enough to get involved!

Apparently this project goes hand in hand with a Franco-German proposal to create a “European History Book,” to be used in all schools across the EU in order to “foster a common cultural identity.” Like hell it will. It will be an exercise in dissimulation and evasion, an avoidance of inconvenient truths and facts that dare not speak their name.

Metternich once said that Italy was only a geographical expression. If that is true of a country that still shows deep political and cultural fissures a hundred and fifty years after the Risorgimento, a process which brought superficial unity, it is doubly true of Europe. Beyond living on the same continent we, in England, have very little in common with the other nations of Europe. Our history is unique; we show little of the slave mentality that was such a feature of the pasts of so many of our neighbours.

I might argue that there is something deeply sinister about the whole Museum of European History project, something Orwellian along the lines of the Ministry of Truth, where the past will continually be rewritten in the light of Big Brother’s perceptions. It won’t be about objectivity and historical truth but anodyne propaganda. Yes, I could argue that there are sinister motives here but the whole thing is far too banal for that particular spin.

This House of Euro Cards is scheduled to open in Brussels in 2014. In a way it’s a sign of the Nero-like blindness of the Eurorats, singing in a vacuum while Greece and much of the rest of southern Europe burns. Does anyone in this country want this narcissistic project? Want it or not it will cost British taxpayers alone £19million, that’s around $30million.

It’s just another example of the massive waste that is such a feature of an organisation that exercises power without responsibility, the prerogative, as was once said, of the harlot throughout history. Yes, that’s another way of looking at the European Commission, a massively expensive mistress, a sort of Madame Pompadour, kept by the various governments of European Union, who have continually ignored or sidestepped the wishes of their own people, the people from whom the largesse is ultimately drawn.

There are lessons in this for those who care to look, lessons for the French particularly in the decline and fall of the Bourbon monarchy. Ah, but that demands looking at history objectively, not through a prism of self-deception.

There is a madness here that’s almost impossible to fathom, recklessness in the face of political reality, a wilful waste of money in the midst of the deepest economic crisis in decades. The decadence is such to recall the twilight of the last Roman Empire. I guarantee that is something else that will be airbrushed out of the House of European Lies.
Posted by Anastasia F-B at 16:33