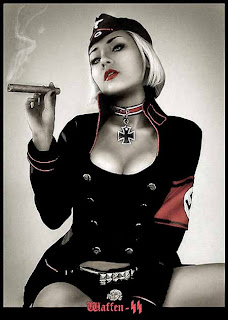 I’m guilty, I confess it; I am a fellow traveller of Anders Behring Breivik, the Norwegian mass murder, now on trial in Oslo.  Surely you must have noticed the association, even if you’ve only descended occasionally to the realm of the Imp; surely you must have noticed that I swing to the right?  I stand accused along with the likes of Melanie Philips, Mark Steyn and James Delingpole.

The thing is, you see, if you strip away Breivik’s more outlandish rhetoric there is little to separate his views from mine, or the views of conservative critics in general, and that includes those in the mainstream press.  I have repeatedly condemned mass immigration, multiculturalism, cultural Marxism, Islamic extremism (not Islam as a religion, I have to stress) and political correctness.  I’ve condemned so many other fashionable notions that have served to undermine some of our most cherished institutions, served to undermine our sense of who we are and where we belong.  Breivik’s bêtes noires are my bêtes noires and, as Voltaire wrote, “those who can make you believe absurdities, can make you commit atrocities.”

Yes, there is little to separate Breivik’s views from those of right-wing ideologues like myself.  It must be true; it says so in latest issue of the New Statesman, and the New Statesman is always right or left or whatever.  They have me and others of my kidney bang to rights!  In expressing a view I deal in misinformation and distortion; in expressing a view I give encouragement to those who deal in death.

In this respect I am totally unlike Mhedi Hasan, the magazine’s Senior Political Editor.  I’m not a Muslim, you see; I’m a kafaar, an atheist and a disbeliever, a person of no-intelligence; I am cattle.  Let me be completely fair, least I be accused of taking his words ‘out of context’.  This is the context;

The kaffar, the disbelievers, the atheists who remain deaf and stubborn to the teachings of Islam, the rational message of the Quran; they are described in the Quran as, quote, “a people of no intelligence”, Allah describes them as; not of no morality, not as people of no belief – people of “no intelligence” – because they’re incapable of the intellectual effort it requires to shake off those blind prejudices, to shake off those easy assumptions about this world, about the existence of God. In this respect, the Quran describes the atheists as “cattle”, as cattle of those who grow the crops and do not stop and wonder about this world.

Actually, he’s wrong.  Speaking for myself, I do stop and wonder about this world.  I stop and wonder particularly about the New Statesman; I wonder what its Fabian founders would have made of this view; I wonder what George Bernard Shaw would have made of it, given that he frequently attacked religion.  No matter; Mehdi has spoken.  I am cattle; I live my life like an animal.

The New Statesman has spoken also, drawing a continuum between right wing reflections and mass murder.  I wrote not so long ago condemning the School of Critical Theory in particular and political correctness in general (American Disease, 17 January).  Now - would you believe it? -Mad Anders embraces a similar denunciation in his rambling Mad Manifesto!  So, yes, we of the right are guilty for all of his delusions.  I write; he acts; it’s as simple as that; it’s as simple as the New Statesman.

So, if you are in the habit of coming this way do be careful least I infect you with right wing rabies.  I might write soon expressing my contempt for paedophiles, wife beaters and knuckle-headed New Statesman editorial writers and columnists.  I expect that shall be the spur for another Anders to act, brooding away in some bedsit in lonely and paranoid isolation.  I expect the Old Bill to call on me at some point in the future, arrested as a perpetuator of absurdities.

After that the rest will be silence, or only the word according to the New Statesman will descend upon you.  In the meantime I shall leave all of you unreflective cattle with the particular words of Mhedi, straight from the horse’s mouth, or whatever other animal he has a preference for.