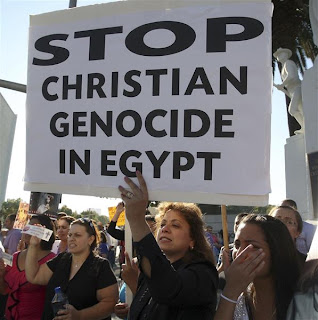 This is an article I had published on Broowaha on Easter Sunday under a different title.  I want to preserve it here also.

It’s Easter Sunday, late in the evening. I’m in for the weekend, looking out over the city of lights. It’s been a wonderful few days. I’m not in the habit of writing on vacation, especially when I’m on a romantic interlude in the most romantic city on earth!

I could have held this article over until Monday evening, when I’ll be back in but, as I say, this is Easter Sunday. There is no better time to draw your attention to the plight of the ancient Christian communities in the , now in serious danger of extinction.

These are the original Christians, people whose forebears were settled in the area several centuries before the Muslims arrived. For them the Arab Spring has not brought liberation but persecution and fear, all caused by the upsurge of militant and murderously intolerant forms of Islam.

Most of you will be aware of Hilary Clinton’s attempt to have a UN resolution passed, condemning the government of Bashar al-Assad for the violent assault of the Syrian army on the rebel-held city of . What you may not be aware of is that Islamists in the city have carried out a ‘religious cleansing’, forcing 50,000 Christians to flee from their homes in terror, a fact reported by Douglas Davis in the latest issue of the Spectator.

It’s not an isolated event. Christians in other Syrian cities have come under attack. Bishop Antonine Audo of , where a car bomb was exploded in the Christian quarter last month, says that the people are very afraid – “The Christians don’t know what their future will hold.”

Left-liberals are much given to gnashing of teeth over the plight of the Palestinians at the hands of the Israelis. There are no laments at all over the persecution of Palestinians…by other Palestinians. The threat even extends to , the literal and metaphorical cradle of Christianity.

As mentions in his article (Out of the east), thirty years ago three quarters of the people living in the town were Christian. A reign of terror by Islamic extremists, involving land theft, intimidation and beatings, has reduced that figure to an estimated ten per cent.

The violence extends to Hamas-controlled , where half of the Christian
population have left their homes since the terrorist organisation took control of the area in 2007. Hardly surprising when one learns that there have been calls for people to slaughter their Christian neighbours, a chilling fact that seems to have escaped the likes of Alice Walker and all of the other 'useful idiots' who would succor Hamas.

I was in last November, when I made friends among the local Coptic community, people whose ancestors were in the country in the days of the pharaohs. The email correspondence I receive confirms the reports of growing apprehension in the face of the victory of the Islamist parties in the parliamentary elections. There have been killings and church burnings from in the south to in the north. Last year no fewer than 200,000 people were forced to leave their homes under threat of further violence.
The greatest tragedy of all, though, has to be the fate of the Christians of Iraq, whose exodus from the country in the wake of George Bush’s ill-conceived invasion of 2003 has reached biblical proportions. Before the invasion there were 1.4million. Now only 400,000 are left.

Since 2003 nine hundred and fifty Iraqi Christians have been murdered and over sixty churches bombed. The United States Commission on International Religious Freedom warned recently that “the end of Christianity in ” was approaching. Most of those who are left are the elderly, people who exhausted their savings helping their children leave.

Amidst this unprecedented tragedy there is one bright spot for Arab Christians – , a state that guarantees freedom of worship to all faiths. There the community has increased by an estimated 2000 per cent. In highlighting this fact, West goes on to make the following observations;

Never mind the ‘Israeli apartheid’ myths that flourish on ’s university Campuses. What intrigues me is why Britain’s political and media classes, normally so sensitive to humanitarian issues, turn away in the face of very real apartheid-style oppression that persists on the Arab world; why they remain silent as Christians are persecuted and the UN Human Rights Council, which last month endorsed the human rights record of Libya’s late Mummar Gaddafi, peddles its bizarre nonsense.

I’m guessing the position here is the same in the States, at least judging by the attitude of Hilary Clinton. I would urge you all, Christian or not, to spare a thought for an ancient community facing annihilation, even if she does not.