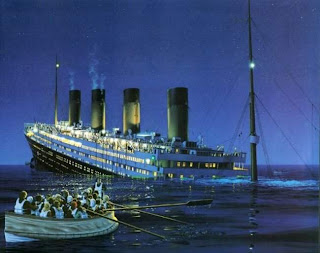 James Cameron’s 1997 epic Titanic is shortly to be released in 3D to coincide with the hundredth anniversary of the sinking of the unsinkable this month. I saw, and loved, the original when I was a child. I’ve seen it several times since and am not likely to go to the cinema simply for a few wow-me visual afterthoughts.

I dare say a lot of people will go, a new generation who will be coming to it for the first time; coming to the story of Rose and Jack, star and class crossed lovers, playing out their time in the shadow of a greater drama.

The story of the Titanic itself has moved beyond history into mythology. Like all great myths it really stands as a metaphor for the human condition, capable of multiple interpretations, meanings shifting from one generation to the next. In one preview I read of the reissue of the Cameron film the writer said that it was a metaphor for a troubled global economy. Yes, I can just see how the ostentatious luxury of the first class passengers, oblivious to the icy crash to come, would feed happily into the preconceptions of the Occupy shower in London and New York!

The anniversary of the disaster has also occasioned a BBC mini-series scripted by Julian Fellowes, the creator of Downton Abbey, that risible parody of early twentieth century English life, upstairs and downstairs. The first episode was screened the weekend before last. I didn’t watch it but I’m told it’s the usual nobs and naffs tale of first class and steerage, the old tiresome clichés trotted out in a kind of Downton Abbey at Sea style.

The sinking of the real thing took almost three hours, time enough for all sorts of dramas to be played out, memorably caught not just by James Cameron but by earlier movie makers. Even the Nazis had a view. In the 1943 film Titanic they produced a propaganda piece highlighting supposed British profiteering. It’s a story of greed and corruption by the share holders of the White Star line that might very well find a sympathetic echo with the Occupy anarchists. The message at the end is that the death of fifteen hundred people remains unatoned for, “an eternal condemnation of England’s thirst for profit.” Banned in West Germany after the war it promptly became a hit in the Soviet zone!

Class and profiteering are two dimensions of the Titanic story. Another is that of human nobility, the nobility of men who sacrificed their own lives, holding to the principle of ‘women and children first’ when it came to places on the lifeboats. After the sinking the chief indictment against J Bruce Ismay, head of the White Star line, wasn’t profiteering but the fact that he secured a place for himself on one of the limited number of lifeboats. The suspicion of cowardice was to hang over every man who survived the sinking.

Ah, but such chivalric notions may now be as deeply sunk as the Titanic itself. In the recent Costa Concordia sinking some men, even members of the crew, muscled ahead of the women. Writing in the Spectator Melanie McDonagh gives the question a political spin. Which public figure, she asks, would you trust to give up his seat…George Osborne? Ken Livingstone? Richard Dawkins? Personally speaking I really can’t vouch for George but I hope I never sail with either Livingstone or Dawkins!

I suppose the issue here centres on changing notions of equality. Put another way, the woman of 2012 is not the woman of 1912. If women are no longer the ‘weaker sex’ then questions of precedence are as antiquated as chivalry. Actually such considerations are not entirely new. Soon after the sinking one anti-suffragette song contained a chorus extolling boats over votes. Progressive Woman, a Chicago-based feminist journal, took up the point, saying “If you please, the women are beginning to say that they are willing to exchange the chivalry for the right to help run a government that will build safer ships.”

It’s gone now, the Titanic, finally sunk from living memory with the death in 2009 of Millvina Dean, the last survivor. But it, and the stories it tells, the morals to be drawn, is fixed forever in the human imagination, where it really is unsinkable.