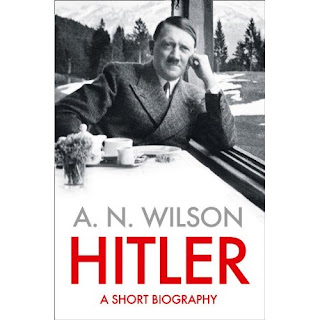 I cast my eye recently over a review of A. N. Wilson’s newly published Hitler: A Short Biography. Now, A. N Wilson, if you’ve never heard of him, is an omnivorous writer, moving with apparent ease from fiction to non-fiction. His Hitler book, intended for a general audience, is the latest addition to the other critical biographies he has penned.

However, before I read a word of the review, I already concluded that this was pointless book. My first thought was who the hell needs yet another biography of Hitler? My second was it’s only just over two hundred pages long; how on earth could all of that history and drama be crushed into such limited space?

Actually, I’m being slightly disingenuous here. I did not, on first glance, read the review – by Bernard Sims in Prospect -, or, rather, I did not read beyond the words Hitler: A Short Biography. By A. N. Wilson. Harper Press, 208pp, £14.99. That was enough for me. But I came back to it; I read it in full, because the book has occasioned a bit of a spat, a hissy fit fought out on the pages of the New Statesman, a perfect cat fight by two old toms!

It began last month when Richard Evans, Regius Professor of Modern History at Cambridge and a specialist in the Third Reich (his three volume history is commendable), wrote not so much a review as an assassination of Wilson’s book, concluding that “It’s hard to think why a publishing house that once had a respected history list agreed to produce this travesty of a biography.” The answer is simple, prof; it’s by A. N. Wilson, who sells, and it’s about Hitler, who sells!

That might have been that. After all, most of the people likely to buy this book probably don’t read the New Statesman; they may not even read reviews at all. But dear old A. N would not let matters rest; he took up the gauntlet so freely thrown, thus starting a new blitzkrieg, spread over several issues of the NS, a withering barrage of words!

I rather think Evans was a bit miffed that an outsider had intruded into his own lebensraum; he certainly chews the carpet, Hitler-style, in his review. ‘Banal’, ‘stale’ ‘cliché ridden’, ‘unoriginal’, ‘lame’, ‘tired narrative’, came his verbal panzer shells. Wilson counter-attacked on the magazine’s letters page: “All is joy. The war is over. Hitler is dead. Get a life, poor Evans. There is no need to be so cross.”

Evans did not rest; his Stukas screamed down from the sky the following week – “I am cross with him not because I think only specialists should write about Hitler - I explicitly noted the contributions made by novelists and literary scholars - but because he has simply ignored 99.9 per cent of the work on the subject done by historians, and as a result has written a book that is absolutely valueless as well as full of errors, many of them not minor at all.”

I read in the Telegraph that this is not the first war in a tea-cup that Wilson has been involved in. In 2002 he wrote a review of Bevis Hiller’s biography of the poet John Betjeman, calling it a ‘hopeless mishmash.’ Four years later he produced his own biography of Betjeman, citing a passionate love letter written by the poet’s mistress. It was hoax. The ‘mistress’ was Hiller, a lover scorned, coldly calculating his revenge, waiting for just the right moment, penning and planting the said epistle. The first letter of each sentence spelled out “A N Wilson is a shit.”

Anyway, back to Hitler, back to Simms’ Prospect review, hopefully for a less impassioned view. It was. My initial judgement was right: this is a book not worth reading. Wilson apparently tries to draw some parallels between the 1929 crash in the world economy, which gave Hitler his big opportunity, and that of 2008. He is looking, in other words for a second coming, a new beast, slouching towards Bethlehem to be born.

That’s reasonable enough, I suppose; these are uncertain times; people are insecure, fodder, one might think, for demagogues. What do we get? Why, such illuminating insights as a comparison between Hitler’s demand for typewriting lessons for children and Tony Blair’s call for a laptop in every British primary school! Ah, yes, a sign of a Reich to come. I have no idea or not if A N Wilson is a shit but he’s clearly had a bit of a downfall.