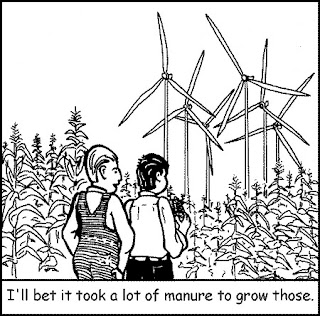 Matt, the fifth Viscount Ridley, is one of the people that I am thankful for. A businessman, a libertarian and a journalist, he has done so much to expose bogus and fashionable nostrums. Rather like a modern Don Quixote he has tilted at windmills, wind turbines, to be exact, relentlessly exposing what I am convinced is the greatest ‘alternative energy’ scam of the age.

Writing previously about wind farms I made the following points;

Writing recently in the Spectator, Ridley tabled a fresh indictment. As he says, to the nearest round number the amount of energy that has been generated by wind farms comes to exactly zero. But the cost has been huge; the cost in fuel poverty for the elderly, in regressive subsidies which pass wealth to the wealth, in the destruction of rural communities and landscapes, in the loss of jobs, the felling of forests and the destruction of wildlife. Things have gone that can never be replaced.

But for so long the politicians were blind to all of this. In Bath, one of England’s most beautiful cities, the Liberal Democrat-led council even proposed to erect a 240ft wind turbine on the hills just to the south. The scheme was heavily promoted by a local landowner, the only person who stood to benefit in windfall profits. It was only after mass protests, and a threat by UNESCO to take away the city’s world heritage status, was the proposal reluctantly dropped.

Now, it would seem, central government is beginning to blow less wind. The big multinationals, who are investing heavily in offshore wind, are beginning to worry that the cornucopia is not endless, that subsidies may no longer he as easy to get in future as they were in the past. Vestas, which wants to build a turbine factory in the county of Kent, is seeking assurances from David Cameron, the Prime Minister, that he is still behind wind energy. Thankfully, George Osborne, Chancellor of the Exchequer and master of the purse strings, has made it clear that he at least is dead set against further expansion, all on the grounds of cost.

Quite frankly we have been scandalously misled by an unholy alliance between stupid politicians, the self-regarding green lobby, covetous manufacturers and venal land owners. Even in economically vibrant times the policy made no sense. One would have to cover this fair land from end to end with wind farms to meet even a fraction of our future energy needs. But in these economically straightened times wind appears to be just that – wind. It took austerity to expose this scandal.
Posted by Anastasia F-B at 16:30