The Monster of the Idea 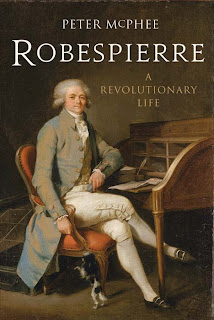 In Danton, the 1983 biopic based on the life the French revolutionary, the eponymous hero, standing on the threshold of execution, says that “Everything might go on fine if I could give my legs to that cripple Couthon and my balls to Robespierre.”

Put another way: sans balls! He was not as other men; he was not as the sybaritic Danton, perfect in his imperfections. I wish I could be sure that Danton actually said those words, that they did not simply emerge as a piece of poetic licence; for they really do, in all their crudity, cut to the heart of the matter and the man; they cut to the heart of the high priest of the cult of virtue. Personally I can think of no better epitaph.

These thoughts were brought on by my reading over the weekend of Robespierre: A Revolutionary Life, a new treatment by Peter McPhee, professor of history at the University of Melbourne and a specialist on France. I think I must be the last person to be reviewing a book on Robespierre, for I have no sympathy whatsoever for the subject, the first of history’s modern fanatics. I’ll try my hardest to be fair but do treat my words with a modicum of caution!

I can certainly be fair to McPhee, whose work is balanced, lucid and scholarly. Any biography of Robespierre presents difficulties because he left little in the way of personal introspection, anything that would give a clue to his psychological makeup. But the author builds up a careful portrait, drawing on what contemporary evidence is available.

The chapters on his early life and schooling are good, showing the boy as the father of the man. Robespierre was one of the brightest pupils at Louis-le-Grand, the leading school in France at the time, where he immersed himself in the Roman classicists, particularly Cicero. He also read deeply into the work of Montesquieu and Rousseau.

Virtue and what it means to be virtuous was to emerge as the leading theme of Robespierre’s life. In 1789 he wrote the duty of rulers was “to lead men to happiness through virtue, and to virtue through legislation.” There is an echo here of the American Declaration of Independence, which, among other things, defines the pursuit of happiness to be an inherent right. But America was fortunate enough to escape real definitions of happiness and how the elusive creature was to be caught; France did not. The chimera was to be conjured up in the so-called Republic of Virtue, Robespierre’s legacy to history.

The paradox is that by any measure Robespierre began as a decent human being, genuinely concerned with the various abuses suffered by ordinary people under the old political order. Though of the left he began his career as a moderate. He was opposed to the declaration of war against Austria in April, 1792, a step urged on by the Girondins, and he was initially opposed to the overthrow of the monarchy later that same year. He also argued against the expulsion of the Girondins from the Convention after the political mood had turned against them. But as the climate turned radical Robespierre turned more radical. A member of the Mountain in the Convention, he was, for a time, their Mohammad.

Georg Büchner’s play Danton’s Death, upon which the above named movie was based, has some fascination exchanges between Danton and Robespierre. Picture the scene: it’s the spring of 1794, the height of the Reign of Terror. Danton argues that enough is enough, that the Revolution is drowning in blood. In response Robespierre says that the social revolution isn’t over yet and he who makes half a revolution digs his own grave. For him Terror had become the emanation of virtue, the only certain way that France could attain revolutionary happiness.

McPhee does a superb job in sailing through these stormy waters. He shows a man who came to believe that the destiny of the Revolution ran through his own person. For him patriotism was a black and white issue, with good revolutionaries on one side and evil counter-revolutionaries on the other. In other words, by 1794, Robespierre was no longer capable of discriminating between dissent and treason. Not even friendship got in the way. This absence of subtlety was to consume Camille Desmoulins, once his most intimate associate, insofar as this priggish man could be close to any individual.

Blind fanaticism was the corruption at the heart of virtue. The decisive moment here, the moment that foretold Robespierre’s doom, was the French victory over the Austrians at the battle of Fleurus in June 1794. All at once the military crisis had passed; France was no longer in danger; the justification for the Terror was over.

There are deeper issues here, things the author does not touch, largely, I suspect, because they are beyond the provenance of history, more a mater of philosophical and psychological speculation. What, in the end, would a true Republic of Virtue look like? Could this political Garden of Eden exist beyond the pages of Rousseau and the mind of Robespierre? My own answer is simple enough; that the Terror was to disguise the impossibility of Virtue; it was compensation for frustrated dreams of purity. As I once wrote in a review of Danton’s Death, Robespierre was the monster of the idea, a prototype for others to come. He is the one historical figure for whom I have a particular loathing. McPhee did well to steer me calmly through a rocky life.
Posted by Anastasia F-B at 16:36