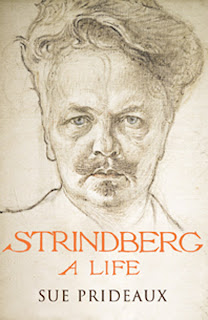 “There is properly no history; only biography”, so wrote Ralph Waldo Emerson. I begin to feel this is true, having consumed life after life in my recent reading. There was Savonarola, then Queen Anne, then Wilkie Collins, then John Dee, then Robespierre. And now, for something completely different, there is August Strindberg!

Yes, I’ve not long finished Strindberg: a Life by Sue Prideaux. Published in this centenary year of his death, it’s the first full biography in English of the Swedish literary giant for thirty years. Actually, while he is best known as a playwright and theatrical innovator, it’s almost impossible to pinpoint Strindberg, a man of restless and towering temperament. The dramatist was also a novelist, an essayist, a journalist, a photographer, a horticulturalist, a poet, an occultist, a historian and a painter.

Prideaux begins her masterly study with an observation that comes close to being axiomatic: “During the writing of this book it became apparent to me that outside Scandinavia Strindberg is best known for two things: Miss Julie and alarming misogyny.” It was so alarming that the year after his death Rebecca West wrote that “There will never be – except among the perverse – any enthusiasm in England for the works of August Strindberg, the foremost European masculinist and hater of women.”

And, my goodness, how outrageous his hatred could be! At one point he called on legislators to reconsider the emancipation of “criminal, instinctively evil animals.” It seems to me, though, that the intensity of his passions here carries its own absurdity, almost like the theatrical anti-Semitism of the French novelist Celine. After all, this is a man who was married three times, so he can’t have hated women that much.

His misogyny, moreover, was largely conditioned by developments in his own personal life (paranoia was a recurring problem) rather than the wider political or social world. The Father, a play in which a sea captain is deliberately driven mad by doubts over the paternity of his children, was written at a time when he was having doubts about his own children by Siri von Essen, his first wife.

If you really do see Strindberg through the eyes of Rebecca West then it may come as a surprise that he started out as a great champion of women’s rights, as Prideaux points out, in advance of most contemporary feminist opinion. Getting Married, his 1884 collection of short stories advancing the cause of female emancipation, was considered so scandalous that he was arraigned on a charge of blasphemy.

In so many ways he was a man beyond his times. For example, I was surprised to learn that it was not until 1984 that Miss Julie, a play which deals with sex and class as power relations, was played in an unexpurgated version in his native land. So much for Scandinavian sexual liberation!

Altogether his was a remarkable life, Storm at one point, Stress at the next! If ever any individual proved the truth of John Dryden’s poetic observation that great wits are sure to madness near allied it is Strindberg. A heavy imbiber of absinthe, he came close to complete mental collapse in the 1890s, the period of his self-defined ‘inferno crisis’. It was this time when the Gothic quality of his life achieved a particularly bizarre intensity, detailed in Inferno and From an Occult Diary, his own accounts of the period.

The remarkable thing here this is the lucid description of a spiral down into madness by a man who, in the end, managed to retain control of his sanity. Was it just another role, like his misogyny, a drama being played out in the theatre of his life? Talking of parts I may as well mention him as the Sorcerer’s Apprentice. Long fascinated by the occult and a believer in alchemy, he makes the claim that he turned some dirt from the Montparnasse Cemetery in Paris into gold. Yes, gold, glistening through a drug and absinthe-induced fog!

It was also during the Inferno period that he wrote an admiring review of Edvard Munch’s masterpiece The Scream, that is before he concluded that the painter was trying to murder him! It seems obvious that The Scream is a painting that anyone in a volatile mental condition would do well to avoid, cutting, as it does, into intense states of emotion. 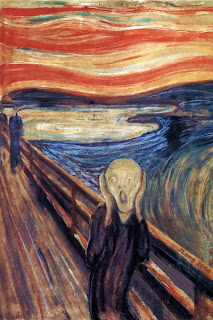 At the end of a journey, one taken through success and failure by turns, from a miserable childhood through mature delusions, we are left with the brilliance of the life, which proves the point of alchemy, in a metaphorical sense at least – some base things can be turned into gold. Prideaux is to be commended on her own alchemic talents, conjuring her way with considerable panache through a life simply packed with incident and drama, onstage and off.
Posted by Anastasia F-B at 16:04