My Life as a Dog 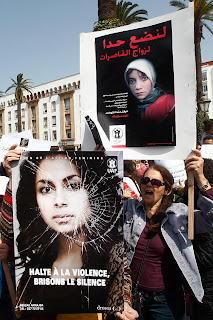 Amina Filali was a sixteen-year-old Moroccan girl. I say was because she is now dead. She killed herself last weekend in a particularly horrible manner – she swallowed rat poison. Why? Because she had suffered a double violation: she was raped by a man and then raped by the law of her land. She was forced to marry her violator.

Under Article 475 of Morocco’s Islamic penal code, a rapist, even the rapist of a minor, can escape prosecution if he agrees to marry his victim. It’s a way, you see, of preserving the ‘honour’ of the violated woman’s family.

Amina’s attacker originally refused to marry her, only doing so to avoid a possible ten year jail sentence. She then had to endure five further months of ‘marriage’ before she killed herself. During this time she complained to her mother repeatedly that her husband was beating her. She was counselled to be patient.

There is now a campaign in Morocco to have this invidious law revoked. There is also a Facebook petition, accompanied by a perfect storm of tweets, all expressing horror at this girl’s fate. Fouzia Assouli, president of the Democratic League for Women’s Rights, said “We have been asking for years for the cancellation of Article 475 of the penal code which allows the rapist to escape justice.

Rape is always a difficult issue no matter where in the world it happens; difficult for the victims, who often carry the sole burden of proof. It’s particularly difficult in Islamic countries. Not only are women prejudged by law to be second-class citizens but if an accusation of rape is raised and not proved they risk being prosecuted for debauchery. Last year a woman in Afghanistan was jailed for ‘adultery by force’ after she was brutally raped by her husband’s cousin. She was only released by presidential pardon, after a wave of revulsion swept across the world.

There are places in the world where it is better to be born a dog than a woman.
Posted by Anastasia F-B at 16:49