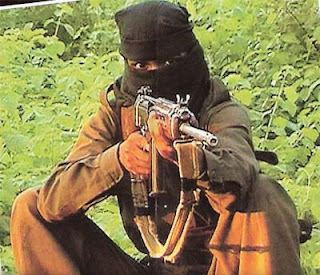 There are problems; of course, not least of which is atrocious levels of corruption. This led to a series of protests beginning in the spring, with people coming out in support of Anna Hazare, an activist very much in the Gandhi mould, who has taken a principled stand over an issue which affects so many areas of Indian life.

This was the big news from India at the turn of the year (aside from the proposed intrusion of Tesco and Wal-Mart, a form of globalisation that many would prefer to do without), news reported across the world; news extensively reported by the BBC World Service when I was in Egypt.

What is not so widely reported is that India, for all its modernity, is suffering from a stubborn and prolonged insurgency, the kind of thing that seems to belong firmly in the past. Elsewhere in Asia Maoism and the Maoist guerrillas of the Khmer Rouge variety are distant dreams; in India they are a present nightmare.

There is the spectre haunting India - the spectre of the Naxalites. This is a Maoist guerrilla movement so named because their rising began in 1967 in the West Bengal village of Naxalbari. These red fundamentalists are active over a huge area in the east of the country, from Andhra Pradesh in the south to the Nepalese border in the north.

By 2006 the situation had deteriorated to the point where Manmohan Singh, the prime minister, described the insurgency as the biggest single internal security challenge that the country had ever faced.

There was really no great exaggeration in this, given that some four thousand civilians had been killed up to that point and 40,000 displaced. These people, often of the most humble origins, left their villages in search of government protection; for the Naxalites, like the Lord’s Resistance Army in Uganda, carry fear before them like a banner.

The movement has a reputation for reprisals against perceived ‘class enemies’, really just anyone they take a dislike to, the kind of ugly savagery that was associated with the regime of Pol Pot in Cambodia. Kanwar Gill, the former Director General of Police in the Punjab, and a counter-insurgency expert, believes that frightfulness lies at the core of Naxalite ideology; that they use the manner of killing to frighten more than the killing itself. Understandable, when one notes that people have been hacked to death with axes.

Last year the Naxalites were responsible for the deaths of almost 1200 people, more than all of the other terrorist groups in India combined. However, the government, whose counter-insurgency operations in the past were often piecemeal, lacking in coordination between central and local authorities, scored a major success when special forces intercepted and killed Malloojula Koteswara Rao, known by the nom de guerre of Kishenji, an important military leader and member of the politburo of the Communist Party of India (Maoist), to give the Naxalites their official name.

Set alongside the deaths of other important figures in the movement, this marks something of a breakthrough. Naxalite killings are also in sharp decline. Last year some 564 people died at their hands, bad enough but a significant reduction over previous years.

Even so, the problem is not going to go away anytime soon. It lies in the nature of India itself; it lies in the uneven picture of development. Mumbai, with its university-educated professionals, is a universe away from the rural communities of the east, particularly the tribal areas, where government, any kind of administration, simply does not exist; where there are no schools, no medical services, no infrastructure, no roads – nothing.

It’s a vacuum filled by the likes of the Naxalites, a point made by Jairam Ramesh, the minister responsible for rural affairs. He went on to suggest dealing with the problem effectively may take another twenty to twenty-five years. It will certainly require resources and a lot of political will. Military solutions are only ever of a temporary nature

India may be rushing into the future but for as long as this problem exists, as long as the Naxalites swim in a sea of resentment, it will continually have to look with apprehension back into the past.
Posted by Anastasia F-B at 16:47