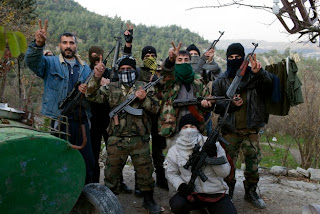 I visited Egypt last November, though I had originally planned to go to Syria. There are some wonderful places there, particularly the remains of Palmyra, who’s Queen Zenobia, a figure of endless fascination for me, once took on the power of Rome. There is also Krak de Chevaliers, the most magnificent Crusader castle in the whole of the East.

I didn’t go, for obvious reasons. After my initial planning last spring the political situation began to spiral downwards in successive stages. It was too volatile, I was advised, too dangerous, so best to look elsewhere. I had a marvellous time in Egypt but I still think of Syria, still hope that one day soon I will, like Saint Paul, take the road to Damascus.

I’m certainly keeping an eye on developments in the country, just as I did last year on Libya, when Sarkozy and Cameron went on muddle-headed humanitarian ‘crusade’, one that has had wholly predictable results, results that I predicted at the time. All the right sounds are being made about Syria, how awful Bashar al-Assad is, how dreadful the massacres of the people, and on and on, but so far the two twits have done nothing but tweet. So, too, has Secretary of State Hilary Clinton, fuming at Russia and China for blocking an anti-Assad resolution at the United Nations.

I despair of our politicians, our leaders, forever incapable of looking below the surface. Look below the surface in Syria and what do you see, the huddled, pro-democracy masses yearning to breathe free, perhaps? No, that’s not what I see. Oh, yes, there is plenty of footage from Homs, the scene, supposedly, of the worst outrages by the Syrian army. But the majority of the country, including the cities of Damascus and Aleppo, is peaceful and unaffected. Sorry, that’s not quite true. As Rod Liddle writes in the Spectator, there have been occasional attacks by the operatives of the so-called ‘Free Syrian Army’ on civilian targets in the capital.

Even the benighted Dame Clinton (I can just picture her in pantomime) admits that, unlike Libya, large parts of Syria are peaceful, that there is no massive anti-Assad movement as there was anti-Gaddafi. What she can’t see, seemingly, is that the opposition, encouraged by the likes of al-Qaeda, Hamas and Saudi Arabia, is dominated not by democrats but by fundamentalists. Not content with allowing the Islamists to take charge in Tripoli she also wants them in Damascus.

“Democracy and human rights” the early demonstrators against Assad chanted. Oh, no, they did not; they were heard to shout “Send the Christians to Beirut and the Alawites to coffins.” Syria has a large Christian minority going right back to the days of Queen Zenobia. It’s now the largest the Middle East, given that the previously flourishing community in Iraq has all but been destroyed by the Bush-Blair ‘crusade.’ The secular Assad regime has long protected the community, just as it has protected the moderate Alawites and other Shia minorities. Now they all face an uncertain future if the rebellion is not contained.

The Free Syrian Army, whose NATO-sponsored ‘government-in-exile’ is dominated by the most reactionary elements of the Muslim Brotherhood, is fighting a proxy war on behalf of Saudi Arabia and Qatar. President Assad describes them as ‘foreign terrorists’ with some justification, for a great many are, coming from Iraq and Libya. The weapons are supplied by Qatar and Saudi Arabia, countries that could not give a damn about the suffering of the Syrian people. No, in the bigger game of politics they just want to replace the region’s last secular ruler, all the more contemptible to them because he is an ally of Iran. In this game the ordinary people of Syria are no better than pawns.

Don’t mistake my position here; I am no friend of Assad, as unscrupulous and as bloody a dictator as they come. But a backward Wahhibi theocracy would be so much worse; worse for the majority, worse for the minorities, worse for women, worse for those who desire even a modicum of personal freedom.

It’s the hypocrisy that angers me most. Western leaders pontificate about the abuse of ‘human rights’ in Syria while conveniently ignoring those same abuses in Saudi Arabia. Britain and France intervened in Libya in support of ‘freedom’, only to see ‘freedom’ crushed in Bahrain without comment. With no appetite in the West for fresh interventions, the Saudis and Qataris are urging us to arm the rebels, a more cowardly course of action I find difficult to contemplate, one that will only prolong the suffering of the pawns of Syria into an indefinite future.
Posted by Anastasia F-B at 15:35