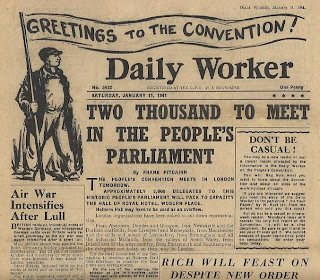 In a recent article in the Spectator (Enemies within, 11 February) Jonathan Freedland rightly challenges some of the myths of 1940, Britain’s ‘finest hour’, when the country stood alone against the power of Nazi Germany. Contrary to the received perception, Britain was not fully united behind the war effort; there were fissures and dissenters even after the high noon of appeasement had passed.

There is the obvious example of the British Union of Fascists, whose leader, Oswald Mosley, was interned that same year as a threat to national security. Oddly enough Freedland does not mention this directly. Instead he alights on the Right Club, a secretive organisation founded by Archibald Maule Ramsay, a Scottish Conservative Member of Parliament, which functioned well into the first year of the war, hoping for an accommodation with Germany

Included in its ranks were a number of influential people from the aristocracy downwards. Even so, its political impact was minimal, restricted to the more eccentric fringes of national life, drawing in ideological crackpots like Lord Lymington, an exponent of blood and soil mysticism. Beyond a lot of talk, nothing practical was done to hinder the war effort, though Churchill, ignoring Parliamentary privilege, had Ramsay sent to Brixton prison, where he was to remain until 1944.

As I say, it’s odd that the author does not mention Mosley and the BUF directly. But the even odder omission is the opposition of the far left, with the Communists, at the behest of Stalin, denouncing the conflict as an ‘imperialist war’. After all, this was the balmy days of the Nazi-Soviet Pact. Unlike the Right Club, all jaw jaw, hostility on the left took a practical form, something that’s been rather submerged in the heroic accounts of 1940.

The Communist Party, through its trade union contacts, attempted to disrupt production. There were even strikes in aircraft factories during the Battle of Britain, as a respondent to Freedland made clear in the in the letters page of the ensuing edition of the magazine. The disruption was compounded by the attitude of the Labour Party, in charge of industrial policy under the wartime coalition. Refusing to apply the Defence Regulations, which would have subjected strikers to martial law, a new pattern of industrial appeasement was established, which was to continue well after the war.

There is also the so-called People’s Convention, which was supposedly set up by the Hammersmith Trades Council to fight for better conditions. In reality it was an initiative directly sponsored by the Kremlin. I’ve written before about this fraudulent organisation, though some of the political innocents who joined were not immediately aware just how fraudulent.

It was all quite subtle in the usual Communist style. People were encouraged to join in support of initiatives like higher living standards or better bomb shelters. Once safely enrolled they discovered that the 'real enemy' was not Germany but Winston Churchill and those members of the Labour party who joined the coalition. The best denunciation of the whole phoney front came from George Orwell, Harold Laski and Victor Gollancz, who in 1940, under the auspices of the Left Book Club, published Betrayal of the Left. In this Gollancz asked;

Can anyone carry self-delusion to the point of being able to read through the file of the Daily Worker [The Communist Party Newspaper] and still believe that this motive was any other than to weaken the will to resist? When, at the same time, you tell people that this is an unjust war, fought for no purpose but to increase the profits of the rich: when you jeer at any comment about the morale and heroism of the public and call it 'sunshine talk'; what possible purpose can you have but to stir up hatred of the government and hatred of the war, with the object of undermining the country's determination to stand up to Hitler?

The Convention, shameful as it was, attracted the support of some prominent intellectuals, including reptilian figures like Raymond Williams and Eric Hobsbawm, who wrote a pamphlet defending the Soviet aggression against Finland, because Stalin was only seeking to defend Russia against an attack by 'British imperialists'!

It was all quite different when Hitler invaded the Soviet Union in the summer of 1941. Then these sophists, traitors and moral cowards served to prove the point once made by Samuel Johnson. Yes, in some cases patriotism really is the last refuge of a scoundrel.
Posted by Anastasia F-B at 16:06