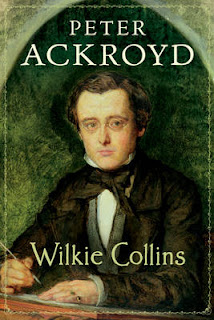 Poor William Wilkie Collins, destined forever to fall under the shadow of Charles Dickens, his contemporary and his friend. Poor William Wilkie Collins, a man who wrote two great novels and a lot of middling ones. But, oh, how captivating this master of Victorian melodrama could be, how mesmerising, how compelling. I read The Woman in White in less than a day, horribly fascinated by the dastardly deeds of Sir Percival Gylde and Count Fosco, two of the most delightfully dark villains in all of Victorian literature! The Moonstone, which I also devoured in a fever, is, as T. S. Eliot once said, the first and best detective novel in the English literary canon.

Collins was a Londoner, born and bred. Like Dickens he is a chronicler of the city in a time of great transition. It’s as well that we remember him in this year when his mentor is being so lavishly celebrated. Peter Ackroyd has in Wilkie Collins, not so much a biography as a literary pot-boiler.

It’s a pity, really, because if I were a publisher thinking of commissioning a work on Collins Ackroyd would be the first writer to come to mind. After all, who could be better? Who could be better than a man who wrote masterly biographies of Dickens and of London? But Wilkie Collins is oddly two-dimensional, almost as if the author was bored with the subject, the occasional flashes of brilliance notwithstanding.

There is much to fascinate in the life of Collins, a man in so many ways wholly untypical of his times. He had none of Dickens bourgeois respectability. He never married. Instead he had two long-term mistresses, one of whom bore him three children. Two mistresses, both of whom knew of the other, meant two households and lots of imaginative juggling. There is an interesting parallel here with his fiction, where doppelgangers abound. I’m thinking specifically of Laura Farlie and Anne Catherick in The Woman in White, shadows, perhaps, of Caroline Graves and Martha Rudd, the women in Marylebone!

Like Thomas de Quincy, Collins was an English opium eater. Suffering from ‘rheumatic gout’, a Victorian portmanteau covering a variety of sins (the ‘sin’ in Collins’ case may have been venereal), he took increasing quantities of laudanum, a tincture of alcohol and opium freely available at the time. By his mid-thirties he was drinking to levels that would have killed those not habituated. There were consequences, of course, terrifying hallucinations, the sort of demon that pursued de Quincy, except his pursuer wasn’t a Chinaman (read Confessions of an English Opium Eater!) but yet another doppelganger, another Wilkie Collins.

Ill-health, addiction and domestic complexity did not stop him working, though by his own admission he had no recollection at all of writing large parts of The Moonstone. As a novelist he came at just the right time. Paper taxes had been abolished in the 1820s; there had been important breakthroughs in printing technology and a mass market was developing with the improvement in elementary education.

This was all helped along by the expansion of the railway, with travellers able to buy ‘Shilling Shockers’ at the new stations. The Woman in White was an immediate sensation, the first edition selling out within a short space of time. It also caused what we would now call product placement, with Woman in White bonnets Woman in White perfume and even a Woman in White waltz.

Collins knew his public. He liked to travel around on the new London omnibuses, picking up snatches of conversation, then colouring his fiction. He was really the first modern sensationalist, and how sensational he could be, touching on the lowest recesses of human behaviour – murder, fraud, adultery and blackmail. And, yes, sex! It’s quite rightly said that there is more sex in Collins’ books than there is anywhere else in the fiction of the time, outside underground pornography. In Basil the eponymous hero discovers he has been cuckolded when he listens through a thin wall while his young bride does the wild thing - noisily- with the book’s villain!

Hardly surprising, given his unusual domestic arrangements, he was critical of what he called ‘clap trap morality’. He was particularly critical of the way that women were treated at the time. To compensate for this, as Ackroyd points out, he created in his books fiercely independent women who defied the conventions of nineteenth century femininity.

So, then, there is lots to be going on with about a writer, about his public and about his times. But Ackroyd seems to have taken his own somnambulant trip through Wilkie Collins. It’s a brief life, a mere two hundred pages compared with the thousand or so of the magisterial Dickens. That may not have been so bad – there is far less original material for a life of Collins than there is for Dickens – but the subject does not seem to engage him. His pedestrian treatment certainly won’t gain Collins many new readers. The problem is, in the end, he makes the author sound like a bit of a bore, a measure, I suspect of his own boredom, or, sad to say, declining power as a writer.

I don’t want to be completely unfair. As I said above, there are occasional flashes of brilliance, of the old Ackroyd. He still has a penetrating eye for detail, picking up on the future significance of the magnifying glass in detective fiction from Sergeant Cuff’s use of it in The Moonstone. The prose shines at points but mostly it’s a picture painted in dull monotones. It gives me the appearance of a book written in a hurry. There are far too many crutches, ‘must have’, ‘seems’, ‘is likely’, the sort of authorial interventions to cover lacunae, words and phrases that simply madden me with their silly imprecision, proof that the writer is not the master of his subject. Collins deserves better. At one time Ackroyd could have done better.
Posted by Anastasia F-B at 15:37