Of Marlins and Men 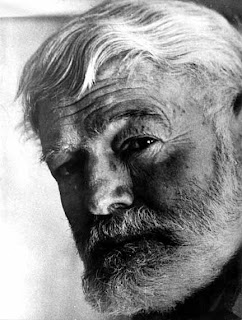 When I first visited Floridita, a watering hole at the beginning of old Havana, one corner of the bar was chained off in tribute to an American writer. It was allegedly the spot where Ernest Hemingway quaffed his daily daiquiri when he was in town. Whether he sat on that lonely stool or not, I thought it a restrained and tasteful gesture. The next time I went the chain and the stool were gone. In its place was grotesque larger than life figure of Hemingway propping up the bar!

It’s now over fifty years since the real larger than life figure took his own life. I have mixed feelings about the man and his work. When he was good he was very very good, and when he was bad he was awful. I was seventeen when I first came across him in The Old Man and the Sea, a wonderful story of transcendent values, simple in its beauty, the tightness of its narrative and the economy of prose. For me it had almost mythological quality.

Later, at university, I ploughed through his other work, delighted at some points, acutely disappointed at others. It’s perfectly obvious that such novels as Across the River and into the Trees and the posthumous Islands in the Stream would never have been published if they had not come with the Hemingway label. But - along with The Old Man and the Sea - A Farewell to Arms, For Whom the Bell Tolls and To Have and Have Not will stand as classics of English literature. So, too, will Fiesta: the Sun Also Rises for introducing the world to a new, more rigorous prose style, though it’s a novel that really did not engage me emotionally. Overall I think that Hemingway did for twentieth century American literature what Mark Twain did for the nineteenth.

His was a truly remarkable life, full of incident and adventure. In a way he became his work and his work became him. There were good and bad things in this; good in that his writing is often imbued with an immediacy and authenticity; bad in that, as time went by, he had to live up to a macho myth, as bombastic as that figure in Floridita. I think in the end it’s a myth that pursued him to death.

Still, for all his limitations, I admire him as a man, as a hunter and as a writer, largely free of cant and dissimulation. There is so much to envy in a talent that was in the right place at just the right time - Paris just after the First World War, where he was befriended by Gertrude Stein and met such architects of twentieth century culture as Pablo Picasso, James Joyce and Ezra Pound. I read a biography of Hemingway a few years ago – the name of the author escapes me - and was amazed by the amount of incident he managed to crowd in while still writing! Incident, love, life and travel, are all there, including four marriages.

But while there was a huge expansiveness, paradoxically caught in The Old Man and the Sea, a tale of a man and a fish, there is also a narrowness, the narrowness of For Whom the Bell Tolls, which, for all of its value as a work of literature, reduces the great tragedy of the Spanish Civil War to a mere backdrop, a setting for testing the moral courage of Robert Jordan, the novel’s American protagonist. Send to know for whom the bell tolls; it tolls for me!

It’s this narrowness that caught up with the man, who began to write in a sort of autobiographical fashion, his heroes really just being dimensions of his own personality and acquired mythos. The buccaneering Harry Morgan of To Have and Have Not is tolerable and believable; the figure of Colonel Richard Cantwell in Across the River and into the Trees is a laughable parody.

In general there is a boy’s own quality to his work that is now largely out of sympathy with the times. I like hunting, I’m a hunter, but even for me Hemingway’s blood lust seems excessive. I got no pleasure at all from Death in the Afternoon, his homage to Spanish bullfighters. And as for the female figures in his books, they are also there to be hunted, for me mostly unconvincing appendages, trophies on a wall!

But he was a man for his time, a pathfinder in a unique American tradition. On my own path, I followed him through the tourist traps of Havana, even staying on my latter trips in the atmospheric and idiosyncratic Hotel Ambos Mundos, where he lodged in the 1930s before he acquired his Cuban home. His room, number 511, is preserved as a museum. I stood there, the sun shining through the window, looking at his typewriter and thinking of marlins and of men.
Posted by Anastasia F-B at 14:17