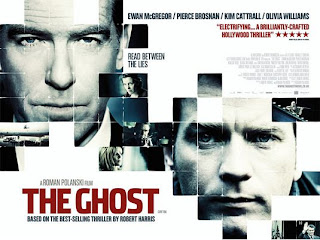 No sooner had I seen one movie about a British Prime Minister when along comes another! Actually, The Ghost, directed by Roman Polanski and based Robert Harris’ novel of the same name (he also wrote the screenplay), pre-dates The Iron Lady by more than a year. I haven’t read the novel so I had no compelling reason to go and see the movie and one compelling reason against – I’m really not that keen on Ewan McGregor as an actor. It was a close friend who urged me to watch it and I’m so glad she did.

It works perfectly; a lean, taught and brooding thriller. It’s not just in the story line, descending ever deeper into a sense of menace, but the general atmosphere, the setting and the unrelenting bleakness of the weather. Most of it is supposedly set in Martha’s Vineyard (actually it’s Germany’s even bleaker Baltic coast), though the upmarket resort seems more akin to a wind-swept Devil’s Island! The devil it contains is a certain Adam Lang, a former British Prime Minister, played with languid elegance by Pierce Brosnan, another actor I had mistakenly considered to be largely second rate.

If you’ve seen it you will know exactly who Lang is based on, even so far as his Scottish-derived name – this is a portrait of Tony Blair. We have him in all of his slick, cosmopolitan shallowness; glib, insincere and somehow unreal. It’s good to have Brosnan in the part, not even pretending to have a British accent, because it makes the rootlessness of the real thing all the more believable.

Lang may have been the great deceiver as PM but he wants his place in history. He writes his memoirs, only he can’t write for toffee; his words are as leaden as the weather. So into the picture comes Ewan McGregor, a professional ghost-writer only ever named as the Ghost. He is the Ghost of a Ghost, in that the previous Ghost died under mysterious circumstances.

Into Lang’s world Ghost is thrown, with troubles from the outset. The manuscript of Lang’s memoirs is kept locked away in a seafront house, a modernist pile that makes Hitler’s bunker look cosy by comparison. Here he meets Lang’s personal assistant Amelia (Kim Cattrall) and his wife Ruth (Olivia Williams), soon to experience all the latent tension between the two. The latter, in one of the best lines in the film, describes the whole setting as being like Shangri-La in reverse.

There is a deep sense of foreboding to the whole thing, a mystery never quite explained, a truth never quite attained. Polanski, himself in exile, directs with commensurate skill, creating a a toxic mix of character and situation. One simply knows there is no happy ending to come.

There is certainly no happy ending for the Ghost. To kill one Ghost is a misfortune; to kill two looks like carelessness! The poor chap, mowed down in the street, got far too close to the truth of Lang’s shady and disreputable past. I could not help thinking of the real-life Doctor David Kelly, whose ‘suicide’ was triggered after he supped too close to a coterie of devils. Ghost uncovers evidence that shows why Lang, when Prime Minister, slavishly followed an American line in international affairs; why, to slip from fiction to fact, Blair was really Bush’s dog. Come to think of it, Barney was a Scottie too!

The Ghost is both an enjoyable thriller and a parody, a send-up of Tony Blair and all his works by Harris (clearly a man disabused of an illusion), who consigns him and his awful wife to a kind of hell. I personally can see Blair and Cherie in Celebrity Big Brother, one that never ends, one from which there is no egress. That should be their Sartre-like fate: No Exit! Do I think Blair’s own memoir, A Journey, was ghosted? No, it’s too badly written for that. 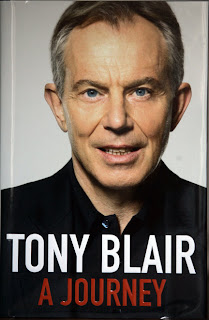 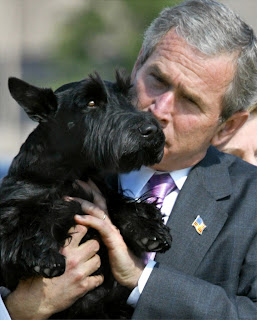