This is What Mitt Romney Actually Believes 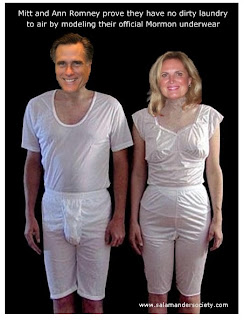 I was once stopped in the street and asked if I would like a free personality test. “I don’t want to test my personality”, I responded “It might just test me back.” The proposed testers in question were scientologists, of course, and this is the bait with which they hook their little fish.

Frankly I did not know that much about scientology at the time, other than having a vague impression that it was a weird and cultish movement based on some dubious blend of religion and science fiction. I found out an awful lot more from watching South Park some time later, an episode called Trapped in the Closet, which featured Tom Cruise, an aficionado of the cult. The actual beliefs of scientologists were touched on, accompanied by an onscreen caption saying “This is what Scientologists actually believe”. And, my goodness, it’s weird. It’s beyond me how any normal and reasonably intelligent person could be taken in by this claptrap…even Tom Cruise.

Actually, it was while reading about what Mormons Actually Believe that I recalled the South Park satire; because, in some ways, as a belief system, it’s just as bizarre. To accept it would take a huge suspension of disbelief, or bottomless pits of gullibility.

My interest was spurred by the spluttering advance in the Republican primaries of Mitt Romney, who may end as the first Mormon in the White House. There I assume he will continue to wear the White Combinations that true believers don day and night, presumably changed now and again for the sake of hygiene!

I should say that there is much to admire in Mormons as people, generally respectable, clean-cut, decent-living and morally upright; in so many ways quintessentially American. But Mormonism as a religion seems to me like a parody of Christianity, more akin to a heretical cult than anything else. In some ways it’s also a parody of Islam, with Joseph Smith, the nineteenth century prophet and founder, as a latter day Mohammed, and the Book of Mormon a latter day Quran. Harold Bloom, a literary scholar, described the former as a “creative misreading of the early history of the Jews.”

The Book of Mormon is certainly creative in its tale of one Lehi, a patriarch who parted not the Red Sea like Moses but the Atlantic Ocean! Well, that is to say, so the story goes, he sailed across in 600BC.

Honestly it’s far too tiresome to go in to all the subsequent elaborations, including the appearance of Jesus in the New World. Let me just say that the old Israelite had two sons, Nephi and Laman, who, like Cain and Able, had a bit of a falling out, giving rise to two warring peoples, the Nephites and Lamanites. Mormon apparently was a general who led the Nephites. But since these light-skinned people were apparently all wiped out by the dark-skinned Lamanites I’m not quite sure where the modern Mormons come from. Oh, yes, I do, from a lot of self-deception and, dare I say it, a healthy interest in polygamy among the pioneers. Yes, I know; they no longer do that!

As I say, there is almost no relationship whatsoever between Mormonism and mainstream Christianity, beyond a bland message of salvation through repentance and faith. In some respects the theological mishmash it presents recalls the Arian Heresy, that concerning the separation of Christ and God, specifically condemned by the Council of Nicaea in 325AD. Really, in essence, Mormonism is a bargain basement faith, a sort of spiritual Wall Mart, with heaven resembling the Walton homestead! Oh, incidentally, the Garden of Eden was in Missouri.

As for dear old Mitt, I’m really of the 'anyone but Obama' school, though out of the uninspiring Republican pool I would far rather go with Rick Santorum. I’m not sure how much Romney’s beliefs (does he really believe all that tosh?) will go against him with the wider American public, though the Republican fundamentalists take a dim view. I would simply suggest, on matters of religion, that he would do well to keep his mouth shut, and, like Tom Cruise, stay firmly in the closet.
Posted by Anastasia F-B at 17:41