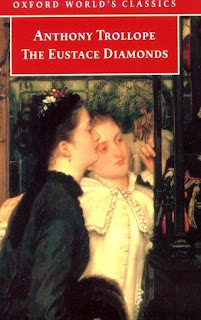 I’ve now completed The Eustace Diamonds, the third in Anthony Trollope’s Palliser series of political novels; another milestone passed; another three to go! I enjoyed Can you Forgive Her? and Phineas Finn, the Irish Member though not nearly as much as the story of Lizzie Eustace and a legacy which brings more trouble than pleasure. It seems to me that the author is much more assured here in his treatment of themes, of plotting and of character, his style much more relaxed, perceptive and gently ironic.

The Eustace Diamonds is said to be the least political of the six. The Pallisers hardly feature at all – though Plantagenet’s obsession with decimalisation makes yet another appearance! -, apart from Lady Glencora's brief lobbying on behalf of Lizzie, taken in as is almost everyone else by this duplicitous woman, such a contrast to the earnest and po-faced Alice Vavasor of Can you Forgive Her?

Yes, Lizzie Eustace is an anti-hero. She reminds me in some ways of Becky Sharp from Thackeray’s Vanity Fair (was this the author’s intention?), though she doesn’t have the same kind of wit or native cunning. Becky makes things happen; things tend to happen to Lizzie, though she is not averse to scheming and lying to try and turn them her way.

It may not be a political novel as such – though the politics of property features highly – but it offers the most marvellous insight into Victorian mores, into contemporary attitudes to property, to wealth, to social relationships and to marriage. Like Vanity Fair, it’s essentially a comedy of manners or a social satire, though not quite as sweeping and as richly textured.

Lizzie Greystock, the daughter of an impecunious Admiral, is a social climber who has climbed quite effectively, making an advantageous marriage to a baronet, Sir Florian Eustace, who conveniently dies, leaving her - as Lady Eustace - with an income, a castle in Scotland and fabulously rich set of diamonds. However, that is not the end of her problems; it’s the beginning.

My, those diamonds; what a burden they are, and not just for the footman who is obliged to carry them from place to place in a strongbox! The problem is that the lawyer acting for the estate insists that the diamonds are not hers at all but an heirloom which should be held in trust, in the face of Lizzie’s insistence that they were a personal gift from her late husband.

I think a Victorian audience would have been more sympathetic to the legal nuances arising here, which now seems all so refined and perhaps rather pointless, especially as the jewels will eventually pass to Lizzie’s younger son, the heir of the Eustace estate. I confess I did not quite understand the motives of Camperdown, the family lawyer, in his relentless pursuit of Lizzie, yea, even so far as the Court of Chancery (Dickens’ Bleak House should be sufficient warning to those who want to take matters there!), especially as John Eustace, her brother-in-law and the nominal head of the family, does not show the same determination. Of course the more legal time the greater the costs, sufficient motive in itself, I suppose.

It’s Lizzie’s misfortune to alienate just about everyone around her, including Lord Fawn, her fiancé, a rather tepid individual and ineffectual member of the Liberal government (her final letter rejecting his already withdrawn marriage proposal had me in stitches!), though her cousin Frank Greystock, whom she deceives without scruple, remains loyal almost to the end.

Abandoned by most decent society, she cultivates her own déclassé and ever so slightly disreputable set, including one Lord George de Bruce Caruthers (one can just picture the twirling moustaches!), a potential suitor and a ‘Corsair’ (Lizzie is an admirer of the poetry of Byron), the grasping Mrs Carbuncle and Lucinda, her self-centred niece, and Sir Griffin Tewett, a man with little in the way of grace or finesse, recalling for me Sir Percival Glyde, the villain of Willkie Collins' The Woman in White. There is also the oleaginous Mister Emilius, the clergyman, who is playing his own disreputable game. All are destined to dance an amusing and wholly mercenary quadrille!

As always some of Trollope’s descriptive passages are quite brilliant, particularly the hunting scenes in which he excels, something I discovered from the two previous novels. The pursuit of the fox is fascinating but not nearly as fascinating as the pursuit of Lizzie the vixen, the most elusive quarry of all.

There are a few things that puzzled me. I’m thinking specifically of Frank Greystock’s treatment of Lucy Morris, the penniless governess he falls in love with and promises to marry, only to neglect her, leaving his conduct, particularly with regard to Lizzie, who has her own designs on him, open to speculation.

It all comes good in the end, though the action here seems to take place ‘off stage,’ so to speak. Was it simply Frank’s insistence that made Lucy acceptable to his family? Was he having second thoughts? He couldn’t visit her while she was a guest of Lady Linlithgow because of her disapproval, but why did he not write?

Sorry; this is Trollope’s novel, not mine, and even with such lacunae it’s a jolly good read, an everyday story of upper class, and shady, Victorian folk. I was completely beguiled, no sooner finished than moving into the foothills of Phineas Redux, my next stage in the journey.
Posted by Anastasia F-B at 15:39