A Future for the Birds 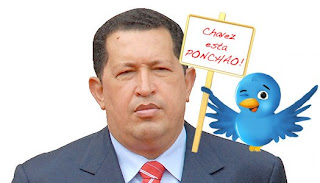 Hugo Chavez, the president of Venezuela, is a Twerp. That’s no secret, I know, but I should make it clear that I mean that he Tweets on Twitter in his bird-like fashion, delightfully informing his many devotees about his bouts of diarrhoea, among other things.

But the little bird had fallen strangely silent of late, the occasion for much speculation in the garden. Did Sylvester finally manage to catch Tweety? Actually, no; he just flew off to Cuba some three weeks ago, seemingly for an operation to remove a pelvic abscess. But like so many other things surrounding the man that turns out not to be true. Not noted for his brevity, he briefly announced at the weekend from his Havana exile that he is recovering from an operation to remove an – unspecified – malignant cancer. Not to worry; he will return, he announced, to continue leading the socialist revolution.

There are a few vultures at home not entirely convinced that he will. Even before the latest health news the intriguers in Caracas were already been staking their ground, making ready to fill the political vacuum. Caesar is indisposed; long live Caesar, long live Chavez. Oh, I don’t mean Hugo; I mean his older brother, Adan, who obviously sees himself as the bird on the wings.

Adan, if anything more radical than his sibling, is certainly the man to advance a ‘socialist revolution’ which has brought this oil-rich country to its knees, its wealth squandered away in one bird-brained scheme after another. At the weekend he addressed a gathering of Chavez supporters at a health vigil for Brother Hugo, telling them that force could not be disregarded in “applying and developing the revolutionary programme.”

And what a programme it has been, with inflation running at 30 percent and unemployment at almost 10 percent. The Bolivarian Republic of Venezuela (yes, that’s the country’s official title) is a little bit like the goose in the fairy tale. Not laying golden eggs fast enough it was eviscerated in the onward flight of the ‘revolutionary programme’.

What an irony it is that a country rich in natural resources has become used to power cuts, shortages of water and a crumbling infrastructure. While production is falling in most branches of the economy there is at least one buoyant sector – organised crime. Caracas, the capital of the Bolivarian Republic of Venezuela, is a place best avoided, given that it now has, according to the London Times, the highest murder rate in the world.

Hugo Chavez had one way of dealing with adverse criticism – silence. The press has been gagged and judicial independence all but ended. He has role models here, ‘brothers’ as he has referred to them, brothers other than his brother. The obvious one is his good friend Fidel Castro, but Chavez’s fraternity also embraces well-know ‘progressives’ like Robert Mugabe of Zimbabwe and Mahmoud Ahmadinejad of Iran.

Venezuela is now so used to misrule that it’s even missing Hugo. I suppose that’s not really that surprising with Adan getting ready to become the Tweeter-in-chief, flying to power on a ‘revolutionary programme’, pointing to a future that is strictly for the birds.
Posted by Anastasia F-B at 16:27