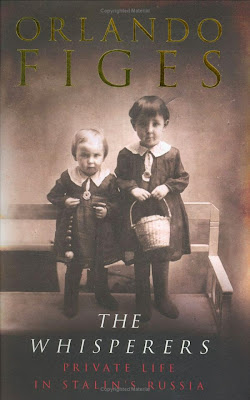 If you’ve seen the David Lean film version of Boris Pasternak’s novel Doctor Zhivago you may recall the scene where Lara, hearing wolves howl in the snowy distance, turns to Yuri in fright, saying that this is a terrible time to be alive. This is in the aftermath of the Bolshevik Revolution of 1917 and the Civil War that followed; history in action, a process that overwhelmed so many individual lives, consumed by fear, uncertainty and terror.

But Lara did not know then how bad things were to become, that the wolves would not stay in the distance or outside the door. In the end she herself was to be the victim of the greatest fear of all – Stalin’s all-consuming Purge of the late 1930s which reached its murderous height in 1937, the Yezhovchina, named after Nikolai Yezhov, then head of the NKVD security apparatus.

In his novel Pasternak writes of his character;

One day Lara went out and did not come back. She must have been arrested in the street, as so often happened in those days, and she died or vanished somewhere, forgotten as a nameless number on a list that was later mislaid, in one of the innumerable mixed or women’s concentration camps in the north.

She was a nameless number, that’s all, drawn into the maelstrom like so many others. As Stalin is reputed to have said, a million deaths is not a tragedy, merely a statistic. The victims of his regime are gone beyond recall, just a meaningless list of meaningless names, voices that can no longer be heard. The rest is silence.

But it’s not. The silence has been broken with whispers. It has been broken by The Whisperers: Private Life in Stalin’s Russia by Orlando Figes, a British specialist in Russian history. It isn’t a new work; it was published as long ago as 2007. The subject certainly interests me, having read and reviewed other books on this phase in Russian history, here and elsewhere. I would have tackled it eventually though I finally came to it as the dust settled after one of the little sandstorms that overtake publishing and the academic world now and then, inevitably obscuring the horizon

I’ll come to this in a bit. Let me begin by saying that I consider Figes to be one of the best historians in his particular field. I hugely enjoyed his account of the Crimean War and I think A People’s Tragedy: the Russian Revolution, 1891-1924 is the single best account of the whole period.

I do not think The Whisperers has surpassed this achievement, but it is still an important forward step in historical research. Its achievement lies in what I would call ‘a panorama from below.’ This is the voice of the voiceless, of people who experienced the Great Terror at first hand, not the politicians, the ideologues and the apparatchiks but the ordinary people of .

Working with a team of researchers, Figes has recovered so much personal testimony on the threshold of an even greater silence. For that alone he is to be commended. He also draws on family archives, letters, diaries, personal memoirs and so on, testimony that would have otherwise have been forgotten, unread and turning yellow with age.

In Stalin’s Russia Big Brother, in the shape of the secret police, was constantly keeping the private citizen under observation, ready to pounce, like a wolf, on the least sign of deviation. I write ‘private citizen’ but there really was no privacy and no retreat. Stalinism fed on moral corruption, and moral corruption begins at the level of the individual.

Yes, the state was ever watchful but it depended most particularly on those who were prepared to denounce others, either for base motives of personal gain – apartment space was at a premium - , or because they wanted to wash out some ‘stain’ in their personal biography by proving themselves more orthodox than the orthodox. One published notice serves here: “I, Nikolai Ivanov, renounce my father, an ex-priest, because for many years he deceived the people by telling them God exists, and for that reason I am severing my relations with him.”

Deception and self-deception, lies and half truths, all were absorbed into a jungle-like struggle for survival. Commenting on one journal from 1937 Figes notes that “…people were becoming so adept at concealing meaning in their speech that they were in danger of losing the capacity to speak the truth altogether.”

In a way personal life turned into a bizarre Greek tragedy, all emotion hidden behind masks. Those desperate to speak the truth turned in on themselves, like Winston Smith in George Orwell’s Nineteen Eighty-Four, confining their thoughts to diaries, a release carrying its own particular danger.

The title has a double meaning that becomes increasingly obvious the further one reads. Whisperer in Russian has two senses: those who speak quietly for fear of being overheard, and those who inform on others, even friends and family, for fear of being suspected. Denounce, in other words, before you are denounced. Figes writes that “The distinction has its origins in the idiom of the Stalin years, when the whole of society was made up of whisperers of one sort or another.”

Personal and moral corruption came through fear and intimidation. There is, however, another form of corruption, one which begins not with baseness but with idealism. The key example here is one Konstantin Siminov, whom Figes singles out as the ‘central figure’ of The Whisperers. He was a journalist, novelist and poet who enjoyed a particularly successful career under Stalin, demonstrating his loyalty time and again.

There was no opportunism here; he was a genuine believer. Even the arrest and disappearance of family, friends and colleagues did nothing to dent his enthusiasm. It was this enthusiasm that allowed him to embrace every ideological perversion, including Stalin’s late anti-Semitism. He was loyal even after the end. As the truth began to come out after the dictator’s death, Siminov held to his early course. The alternative was just too awful: the alternative was to admit that his whole life had been based on a fraud. In the end he did. This was to be his particular tragedy.

The Whisperers is an important book, I would go so far as to say a crucial one, a necessary testimony coming at just the right point in time, coming as a new fog of lies and misinformation about the past and about Stalin descends on Putin’s Russia. Even so it’s not a perfect book; there are flaws. As I hinted above, I read it in the aftermath of a controversy earlier this year. Russian publishers scrapped a projected translation because of alleged ‘inaccuracies.’ The story was picked up by Peter Reddaway and Stephen Cohen, two American academics, who published their findings in The Nation.

Errors of fact are always a concern, particularly when those errors concern people who are still alive. But it seems to me that given the scale and scope of The Whisperers, given the mountain of primary material, such a thing while not excusable is at least understandable. Many of the errors, though, seem to have been introduced by the Russian translators or were present in the source documents. Once this had been taken into account the author wrote that it left “…a few genuine errors in a book based on thousands of interviews and archival documents. These I regret.”

I do not regret this book, perhaps one of the most ambitions and worthwhile exercises in oral history ever undertaken. The flaws notwithstanding, it is a commendable achievement. It is, if you like, the story of a million tragedies.
Posted by Anastasia F-B at 16:02