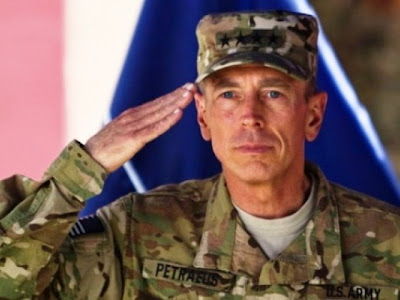 In a recent discussion on the resignation of David Petraeus as Director of the Central Intelligence Agency (CIA) I made the following observation;

Honestly, in this day and age, I’m surprised at such big fuss over something as minor as sexual indiscretion. But always, always follow the politics. I have a hunch that there is more to this story; that Caesar, not just Caesar’s wife, should be above suspicion.

Well, then, there is indeed more to the story, and yes, it touches more on politics than personal morality.  The story of Petraeus, his biographer and inamorata and the third woman would be difficult to make up, even in the most farcical sex farce.  The toing and froing between the CIA and the Federal Bureau of Investigation (FBI) also looks ridiculous, intelligence work that might have been conceived in the mind of Inspector Clouseau.  The whole thing would be risible in the extreme if it was not for the tragedy; if it was not the horror of .

During the recent presidential campaign not enough was made of the murder of the American ambassador and three others in ; not enough was made of the present administration’s intelligence failures.  There are those who still wish to hide the inconvenient truths.  The suggestion – one I find wholly convincing -  is that Petraeus was effectively forced out of office because of potentially damaging revelations he might have made before today’s Senate Intelligence Committee investigation.

What happened in in September must count as one of the most serious breaches of security in recent American history.  The mother of Sean Smith, one of the diplomats killed alongside Ambassador Chris Stevens, said recently that that President Obama had effectively “murdered her son.”  And so he did, by simple negligence.  Obama’s reaction was ‘not very optimal’, to use his own peculiar and tortured English.

Consider the facts.  First the fuss over The Innocence of Muslims was no more than a silly smokescreen.  There was evidence that the attack on the embassy was planned well in advance by Al Qaeda, a 9/11 celebratory bash.  The administration had received hundreds of warnings but did nothing to improve security.  Contrast that with the British, who closed their own consulate after the failed assassination of Ambassador Dominic Asquith earlier in the summer.

Quite apart from anything that Petraeus might have revealed about the fiasco, as a political animal he was suspect, a horse of a Republican colour.  Con Coughlin says in the Telegraph that the general’s friends suspect that his political enemies in the administration simply used his sexual indiscretions as a convenient way of ejecting him from the CIA.  It certainly looks like it, the speed of the whole thing adding to the suspicion.

Do you believe, does anyone believe, that if Petraeus had been an ‘insider’, if he had been ‘one of us’ these inconvenient facts would ever have come to light?  Even if they had, some kind of effort would have been made to stop the ship sinking.  After all, the Democrats are used to sexual scandals; they know how to manage sexual scandals, even so far as the Oval Office.

There are indeed serious questions as to why Petraeus gave a brief to the House Intelligence Committee that contradicted those of the agency he headed over the events in .  Victoria Toensing of Fox News has written;

For some reason DCI Petraeus backed the Obama unsupported theory that the video made the attackers do it rather than his own Chief of Station’s assessment that it was a planned military attack. Why do the shifting stories and misplaced theory of cause matter?  Because if an administration pushes a political agenda that applauds the killing of Bin Laden as the ultimate act for eradicating the radical Islamic threat, then that same administration ignores its Ambassador’s urgent pleas for more security for fear it will appear Bin Laden’s demise was not the answer to that threat.  Our country’s chief spy is supposed to know which theory is held up by the evidence.