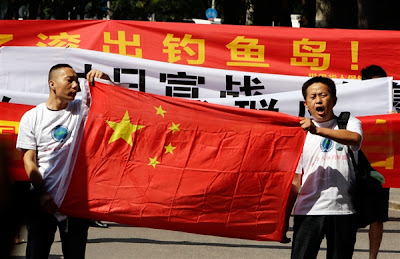 Have you heard of the Senkaku islands?  No?  What about the Diaoyu islands, have you heard of those?  Again no?  If you look on a map you might find the one but you are almost certain not to find the other.  It might be better to say that every map tells its own story, Chinese and Japanese maps more so here than others.  In short, it’s the same place, Diaoyu for the Chinese, Senkaku for the Japanese.  Here, for those respective nations, we can safely say an island by any other name would not smell as sweet.

The smell from the , where ‘the islands’ are located, is fairly rank at the present.  Both nations claim territorial right to these barren rocks, where only the Diaoyu mole or the Senkaku mole makes a home.  Writing it that way round might even occasion another dispute!  No, I shouldn’t make fun, for the political and diplomatic implications are serious enough, with an Oahu-like potential, a point I’ll make clearer a little later.

Possession, the saying goes, is nine points of the law, and here the Japanese have all nine points.  Or, rather, what the Japanese government has is $30million worth of points, having recently bought the three islands in the chain from their private – Japanese – owners.  There may as well have been an earthquake in the archipelago, for a tsunami of nationalist anger swept across much of in the aftermath.

relies on more than purchase; it relies on the diplomatic records to prove sovereignty, saying that this goes back to the Sino-Japanese War of 1894-5.  I’m no expert on international law but this would seem somewhat dubious grounds upon which to make a stand, in that the Japanese could lay claim to by the same aggressive right.  The Chinese can go a several steps deeper; their claim is based on travel records that can be traced right back to the Ming Dynasty.

Chinese sabres are rattling.  I mentioned Oahu, not just because of Pearl Harbor, not just because that is another island where a war started, but because the is an unwilling participant in the whole fuss.  is obliged by treaty to defend Japanese territorial integrity, and the integrity at this moment includes ‘those islands.’

We are not talking World War Two here but we may very well be touching on a regional conflict as intense as that over the , with a lot less clearer outcome.  Geographically and strategically, given the position of ‘the islands’ close to the mainland, the Chinese are in a strong position.

So, why the fuss over the kingdom of the mole?  Is it all down to national one-upmanship?  No, follow the money.  Rather, given that they are islands surrounded by sea, the thing you should be following is not greenbacks but black gold – oil, to be exact, something else the conflict shares with the .

However, the extent of unresolved national anger in over past Japanese aggression should not be underestimated.  It is no accident that protests in took place on 19 September, the anniversary of the Japanese invasion of in 1931.  On the streets reference was made to the later Rape of Nanking, in which thousands of Chinese civilians were systematically massacred by the Japanese Army.  In the Chinese consciousness this infamous episode comes close to occupying the same place as the Holocaust and, as with the Holocaust, there are deniers, here on the Japanese nationalist fringe.

was in ’s shadow for decades before the Second World War (actually their war was far longer than the usually accepted dates for this conflict); it was in the shadows for many decades after, a weak giant.  Not any longer.  Chinese economic power has waxed just as Japanese power waned.  With economic prosperity comes political ambition, the Chinese now seeing themselves, and rightly so, as a major regional power.

The whole question is also complicated by domestic politics in both nations, with the Chinese communist oligarchy playing the nationalist card to deflect attention from internal problems, just as the Japanese government, still under the shadow of the disaster, holds a similar card.  In the ensuing international poker it raised the Chinese $30million.  Who holds the winning hand is still to be seen.

I think those unfortunate moles should start looking for another home, though, preferably where there is no trace of oil, of history or of hate.  The Wild Wood might be best. 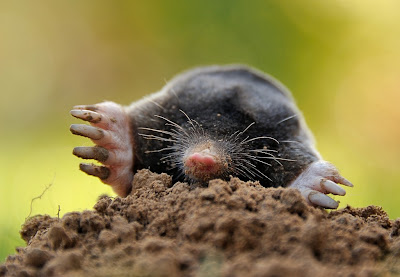