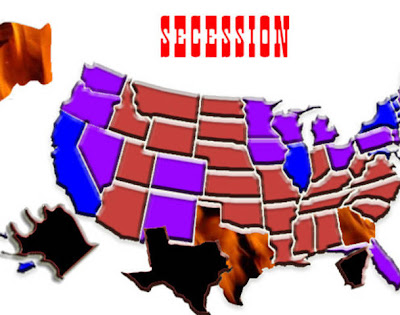 I was amused to discover on Blog Catalogue last night that secession petitions are flooding into the White House in the wake of Barack Obama’s re-election to the presidency.  What, are we really back in 1860, is American on the threshold of a new Civil War?  No and yes, is my answer, a point to be clarified a bit later.

There they are, pleas flooding in from some of the same offenders: from Texas, from Alabama, from Georgia, from Louisiana, from South Carolina, from North Carolina, from Tennessee, from Arkansas and from Florida, all former members of the old Confederacy.  There are also petitions from and from , states that at least had a presence on the Stars and Bars.

But – my goodness – there are also petitioners from the blue North, from , from , from , from , from and – would you believe it? – from !  So the Civil War solved nothing.  Secession is alive and well in American political consciousness!  Actually, it’s one of the great ironies of American history that the original thirteen states in casting off one imperial union bound themselves to another, far less mutable in every sense.

Anyway, Obama has only himself to blame.  Oh, I don’t mean in being re-elected, though that is the clear cause of an autumn of discontent among some Americans.  I mean he is at fault in agreeing to the White House’s We the People website, set up last year with the aim of allowing “all Americans a way to engage their government on issues that matter to them.”

The promise is that if a petition from any given state reaches 25,000 signatures within thirty days the White House has to respond.  When I drafted this article yesterday evening had already exceeded this threshold with 34,000 signatures.  Now it stands at 77,000.  I await Obama’s reaction with interest.

Most of the petitions make reference to the words of Declaration of Independence;

When in the Course of human events, it becomes necessary for one people to dissolve the political bands which have connected them with another, and to assume among the powers of the earth, the separate and equal station to which the Laws of Nature and of Nature’s God entitle them, a decent respect to the opinions of mankind requires that they should declare the causes which impel them to the separation.”

…Governments are instituted among Men, deriving their just powers from the consent of the governed, that whenever any Form of Government becomes destructive of these ends, it is the Right of the People to alter or abolish it, and institute new Government…

That from is more specific, taking us to the real heart of the matter;

Given that the state of Texas maintains a balanced budget and is the 15th largest economy in the world, it is practically feasible for Texas to withdraw from the union, and to do so would protect its citizens' standard of living and re-secure their rights and liberties in accordance with the original ideas and beliefs of our founding fathers which are no longer being reflected by the federal government.

I think this is superbly put.  On the news sites I’ve looked at a lot of the responders are saying that the whole thing is racist, that there are lots of people, especially in the South, who simply do not like a black man in the White House.  I’m not saying that’s not true; it probably is in some cases, but I can see no evidence on the point.  This kind of observation looks more to me like an unthinking reflex: that criticism of Obama, any criticism, is almost racist by definition.  It’s a way of sidetracking the real and substantive issues over his imperial presidency.

With Obama back there are genuine concerns, as the Texans make clear, over the future direction of the country.  It’s as well that people have an opportunity to make their views known, even if it’s only to challenge the darker angels of Obama’s nature.  He is hoist, so to say, with his own petard!

Anyway, the real issue is about consensus, the real issue is about democracy itself.  In any normal electoral process the minority, small or large, bows out with reasonable grace, agreeing to abide by the outcome, recognising the government as their government, even if they did not vote for it.  In essence this is governing by consensus, a civil society bound together by a common understanding, a common set of values.

The alternative, a highly dangerous state of affairs, is governing without consensus, where the minority feels alienated from the whole political process.  This was the state of affairs in for decades. Now I'm not suggesting that the is any way similar to , but fissures are appearing in the body politic which may very well have serious future consequences.  Many people increasingly begin to feel that the federal government no longer represents their interests, no longer reflects the principles upon which the nation stands.

No, we are not back in 1860 but over the next four years a new kind of civil war may very well be fought. Obama clearly presides over a house divided, more divided than it has been in decades.  If anything his victory has compounded his problems.  His constituency is younger, poorer, browner, more blue collar and less self-reliant.  John O' Sullivan rightly notes in the Spectator, that this will inevitably lead to pressures for more regulation, more welfare, great government spending, higher taxes and more unionisation; it will lead to expectations that Obama, faced with a precipitous fiscal cliff, cannot meet, at least not without ruining an older and wealthier , no matter its race or ethnicity.  Meanwhile 's creditors, particularly , are looking on.

So, yes, the house is divided against itself.  Will it stand?  I honestly can't say.  But one thing I am certain of - Obama is no .