There is a letter from Josef Goebbels to Barack Obama in the latest issue of Taki’s Magazine (Dear Barack Obama), an online publication.  What, the long dead Nazi Propaganda Minister to the present Propaganda President; how is such a thing possible?  Apparently the poison dwarf has taken to time travel!

Actually the letter is from one Gavin McInnes, not at all thankful on this season of Thanksgiving for the outcome of ’s early November jamboree.  It’s a reasonable effort, though personally I think the real Goebbels could have done so much better.  Mister McInnes rambles and digresses just a tad.  Keep the message simple, that’s the key.  Goebbels knew that.

Still, once the verbal outer leaves have been stripped away, there is a tasty inner core to the McInnes fruit.  It’s this: Obama won on the basis of what is conceivably the emptiest message in American electoral history: there is simply nothing there, nothing of any substance.  It was all about ‘making a difference’.  What difference, what exactly were people voting for, what exactly made their vote count?  Obama's victory was in essence a brilliant propaganda coup: promising nothing while seeming to promise everything.  Come to think of it these are more or less the same thing, nothing and everything.

Present economic difficulties, of course, are all the fault of George W. Bush.  Let’s see how thin this wears over the next four years.  Barry O, as one of the respondents to Doctor Goebbels said, is Bush on steroids!

Meanwhile the great Barry treads the world stage anew, as fumbling and as cack-handed as ever.  ’s East Coast liberal press fell on Mitt Romney’s alleged gaffs like a pack of hungry dogs in pursuit of a bone; there is really no surprise in that.  No matter how meaty the Obama bones they remain curiously uninterested, and I don’t suppose there is any surprise in that either.

Here, let me throw some flesh your way. There he was in Asia, meeting ’s Ang San Suu Kyi (pronounced Ahng Sahn Soo Chee), possibly the most famous human rights’ activist in the world, long held incommunicado by the country’s military dictatorship.  Associated Press reports that he pronounced her name wrong several times.  She is now seemingly Aung YAN Suu Kyi.  He also made a mess of his greeting to ’s new president;

The meeting came after Obama met with 's reformist new President Thein Sein – a name he also botched.  As the two addressed the media, Obama called his counterpart "President Sein," an awkward, slightly affectionate reference that would make most Burmese cringe.  Note to presidential advisers: For future rounds of diplomacy, the president of is President Thein Sein – on first and second reference.

You may recall that Obama once made some abject overtures to the “Islamic Republic of Iran” during his first term as president, decisively snubbed by ’s Islamist dictatorship.  The process of appeasement continues.  is the name of the country.  It’s the name that Aung SAN Suu Kyi and the democratic opposition use; it’s the name used by the United Nations; it’s the name used officially by the itself.  But Obama continued to refer to ‘’, the name preferred by the former military junta and by the present fig-leaf civilian administration.  I expect if he had been around at the time of the Khmer Rouge he would have called ‘Democratic Kampuchea.’

In the Telegraph Neil Gardiner writes;

It is rather embarrassing, as well as sad, that the leader of the free world can’t even pronounce the name of the most famous human rights activist on the planet. Or that he is so quick to appease ’s authoritarian regime by calling it “”. Barack Obama’s gaffes demonstrate not only a marked lack of attention to detail and a high degree of amateurishness on the part of the White House, but also a disturbing willingness to curry favour with unsavoury regimes. Hardly a good omen for Obama’s second term.

That’s rather well put, I thought, a little more targeted than ‘Doctor Goebbels’ fireworks.  Meanwhile, as far as the real Doctor is concerned, Americans might do well to reflect on the following in the years to come;

If you tell a lie big enough and keep repeating it, people will eventually come to believe it. The lie can be maintained only for such time as the State can shield the people from the political, economic and military consequences of the lie. It thus becomes vitally important for the State to use all of its powers to repress dissent, for the truth is the mortal enemy of the lie, and thus by extension, the truth is the greatest enemy of the State. 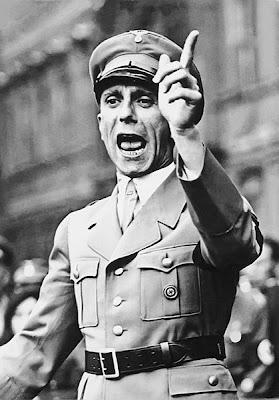