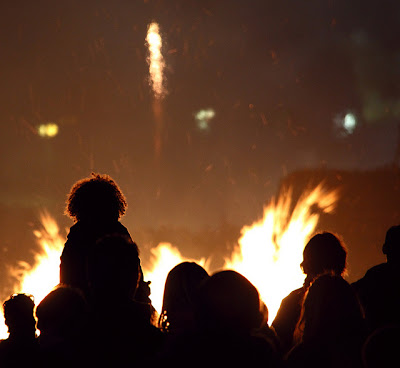 It’s Bonfire Night!  This is an event celebrated every year in on 5 November. It’s a night of fires and fireworks, of bangers and bangers! Now, least those who are not English misunderstand me here, a banger is just a type of firework and a banger is a sausage, really quite delicious when cooked over a fire in the open air.

So, yes, November 5 is our firework night, just as July 4 is firework night in the States. But whereas the one celebrates rebellion the other celebrates loyalty, loyalty to the crown. It celebrates the frustration of the most significant terrorist conspiracy in English history, perhaps in the history of any nation - the Gunpowder Plot of 1605.

The commemoration now is all great fun, the political connotations having been wiped smooth by the hand of time. Still, it’s important not to lose all sight of the fact that if the Plot had succeeded it would have eclipsed even the historical significance of 9/11.

In reconstruction by one of the English television companies, using the same amount of gunpowder planted under a replica of the seventeenth century House of Lords, showed that the ensuing explosion would have left no survivors; that it would have been seen and heard many miles away from London. It’s difficult to imagine the political chaos that would have followed.

The conspirators were headed by one Robin Catesby, though the whole enterprise is now more closely associated with Guy Fawkes, a soldier and explosives expert. You will probably know his face, or a caricature of his face, from the grinningly inane V for Vendetta mask, one of those cultural artefacts that I absolutely loath! Fawkes and all of his co-conspirators were Catholics, frustrated by the failure of the Protestant government of James I to raise some of the more irksome restrictions on their religion.

The discovery of the plot was the cause of an immediate anti-Catholic reaction, recalled in a traditional rhyme;

Remember, remember the fifth of November
Gunpowder, treason and plot
I see no reason why gunpowder treason
Should ever be forgot

Guy Fawkes, Guy Fawkes, 'twas his intent
To blow up the King and the Parliament
Three score barrels of powder below
Poor old England to overthrow
By God's providence he was catched
With a dark lantern and burning match
Holloa boys, holloa boys
God save the King!
Hip hip hooray!
Hip hip hooray!

A penny loaf to feed ol' Pope
A farthing cheese to choke him
A pint of beer to rinse it down
A faggot of sticks to burn him
Burn him in a tub of tar
Burn him like a blazing star
Burn his body from his head
Then we'll say ol' Pope is dead.
Hip hip hooray!
Hip hip hooray!

It was Parliament itself that originally decided that the Plot should be remembered in an annual act of thanksgiving for the safe delivery of the King.  For years after it was known officially as Gunpowder Treason Day, with strong sectarian and anti-Catholic overtones, clearly captured in the rhyme.  This was hardly fair, given that the conspiracy was roundly condemned by the and most English Catholics remained loyal to the crown, fully demonstrated in the Civil Wars of the mid-seventeenth century.

By the following century anti-Catholic sentiment started to die away.  In popular parlance the 5th was no longer referred to as Gunpowder Treason Day but as Guy Fawkes Day.  Latterly it’s more often referred to as Fireworks Night or simply Bonfire Night, after the traditional fires to which an effigy of ‘the Guy’ – any guy really - was consigned.

In these days of ‘elf n safety’ there has been an increasingly nannyish approach to the whole spectacle by public authorities, anxious to corral the masses into sanitised official events.  There is also a tut tutting disapproval of residual anti-Catholic overtones, so residual that it they are only brought to mind by politically correct moral arbiters!  As I noted on a previous occasion, the event isn't even celebrated in Northern Ireland, a place where sectarianism has an abiding presence.

The simple truth is that Guy Fawkes Night or Bonfire Night or whatever you want to call it was transformed from a state-sanctioned holiday into a genuine popular fiesta, the very thing that fills the authorities with fear and trepidation.  If you like it’s anarchy in action, by the people, for the people, of the people.  Long may it remain so; long may the killjoy guys be placed on top of the fires.

Yes, it’s all about fun, and I had fun, watching the rockets illuminate the night sky, dancing around the fire in the best pagan tradition, seeing the encroaching darkness of winter lift just a little. I will always remember.  In future my children, if I have any, will remember also. 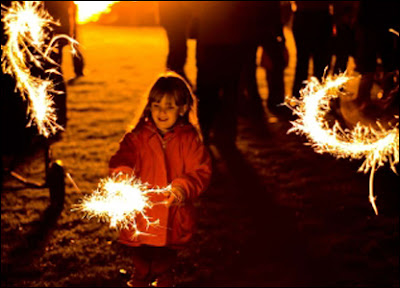