Unhappy in its own way


I saw Anna Karenina on the Saturday just before going on vacation.  This is my overdue review! 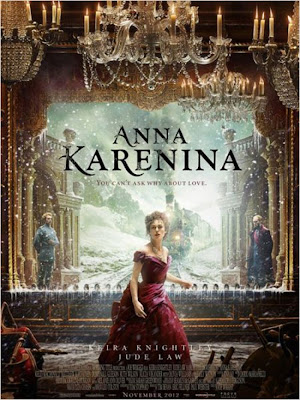 All the world is a stage.  Leo Tolstoy’s novel Anna Karenina is all the world.  Director Joe Wright has reduced it to a stage in his new film adaptation!  If you are looking for the broad canvas and the big sweeps, Russian-style, it’s simply not here.  Instead there is a claustrophobic theatricality for the most part, a movie that seems to represent the triumph of directorial artfulness over emotional substance.

Generally I don’t read reviews before going to see a film; I would far rather form my own judgements first and take in the views of others later.  But I have read the novel and have a clear idea of what I expect from a retelling of one of the greatest fictional epics, a War and Peace of the emotions.  At the heart is a particular tale of unhappiness, the tragedy of Anna and her imperfect love.

No sooner had the curtain raised and the action start to unravel I began to feel uneasy.  This has all the style of a comedy rather than a tragedy, of a silly pastiche rather than grand epic.  The scenes in Oblonsky’s office were so risibly choreographed that it was difficult not to laugh at the sheer absurdity of it all rather than the heavy-handed attempt at puppet-like humour.  The only thing missing was a song.

I’m not going to like this, I thought to myself, and first impressions with me are almost never corrected.  But I was wrong; I began to thaw, once the theatre-workshop element receded a little into the background and the actors were allowed to inhabit their roles, as actors and not as marionettes.  Keira Knightley was splendid as Anna, just as I imagine her, passionate and self-destructive.  Anna is a woman capable of great love, and great love, certainly with her, is to madness near allied.

Her madness comes in the shape of Count Vronsky, prettily played by Aaron Taylor-Johnson, the emphasis here being on pretty.  The best thing I can say about him is that he looked splendid in the white dress uniform of a cavalry officer.  Jude Law, whom I didn’t recognise at first, plays Alexi Karenin, Anna’s husband, more sinned against than sinning.  Actually the emotionally constipated and impeccably correct Karenin is incapable of something as lowly human as sin!  He is virtue incarnate, a counterpoint to Anna’s passion incarnate.  A more temperamentally unsuited couple is impossible to imagine; Juliet, if you can picture such a thing, married to Polonius.

I also warmed, after some initial distaste, to Mathew Macfadyen as Oblonsky, Anna’s insouciant, philandering and bon viveur brother, married to the much imposed upon Dolly (Kelly Macdonald), perhaps a little more physically attractive than Tolstoy really envisaged.

Aside from Knightley, the other acting highlight for me was Domhnall Gleeson as the idealistic Konstantin Levin, Tolstoy’s own partial self-portrait.  His on-off romance with Princess Kitty Shcherbatskaya (Alicia Vikander), moving from unhappy beginnings to a happy conclusion, contrasts with the evolving tragedy of Anna and Vronsky.  Incidentally, the scene where Kitty finally accepts his proposal of marriage in a private word game was exactly how Tolstoy proposed to his own wife.

Levin is arguably the most authentic character in the whole film, less self-conscious and ensnared, altogether less histrionic.  To begin with, after Kitty’s initial rejection, he escapes from Wright’s theatrical setting into the country, which really is the country!

There are some visually splendid scenes in Anna Karenina and the cinematography and costume design are luscious.  Tom Stoppard – my, how this man gets around – has done a reasonably proficient job in reducing a big book to a manageable script, losing none of the essentials.

When the curtain finally fell I found myself admiring the director for his boldness, his idea of the theatre as the world, which is a notion that he apparently grew up with.  Even so I cannot avoid the conclusion that there were points where the medium simply overwhelmed the message.

The imbalance between Knightley’s first rate performance and Taylor-Johnson’s, well, performance, also weakened the overall effect.  A good effort but it could have been so much better, which is the best thing I can say about Anna Karenina.  Still, if it’s an unhappy film at least it’s unhappy in its own way.