Free to Under Threes: Amsterdam by Night 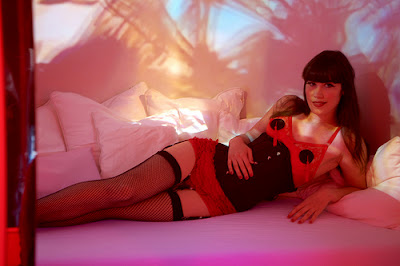 If is beige is red, brick red to be exact.  It’s a compact city, really quite charming in many ways, a city of museums and canals, the city of and Rembrandt.

I was there a couple of years ago, walking everywhere because it’s possible to walk everywhere, all the attractions being within a reasonably close distance of one another.  It was pleasant to give way to the city’s easy charm, at least by day, because it is charming by day.  The night is different; the night is darker; the night is a deeper shade of red.

Is there anything quite as sad as desire?  Is there anything as sad as women for rent and the men who are drawn to them?  I hate clichés.  I really do not want to say that the prostitutes appear in a state of undress like slabs of meat in a butcher’s window, but that’s exactly how they seemed to me.  It was one of the most depressing things I have ever seen.

Amsterdam's legalised window brothels have been in existence for over ten years now.  It’s such a part of the city scene that groups of tourists - not potential clients - are taken on walking tours to see the sights.  Thomas Cook, the company originally founded to promote ‘ethical and educational’ tourism, has since 2005 led excursion through the area, delightful jaunts advertised as “free to children under three.” 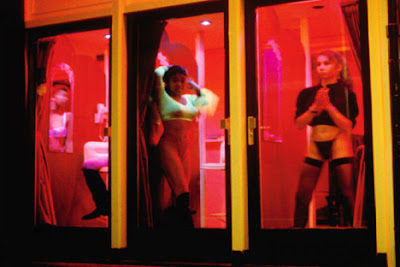 Personally I found walking through the area really quite threatening in the dark.  I’m glad I was not alone.  It’s difficult to pinpoint but I just felt a general air of menace, not helped by the groups of men of Eastern European and Middle Eastern appearance milling around by the canal bridges.

It was all meant to be different; it was meant to divorce prostitution from pimps.  It hasn’t.  The whole thing has been a failure.  Rather than discouraging criminality it has allowed it to flourish under an uncomprehending official eye.  Now the councillors of De Wallen, the district where most of the brothels are located, worried about the community’s reputation, have decided on a cleanup.

The problem is the loverboys, not the sad cases who come for sad sex, but the traffickers, mostly of Asian descent, who lure women into prostitution and then keep them there, locked in emotionally and financially if not physically.  According to an article I read in the October issue of the political journal Standpoint (Window brothels get the red light), their victims are put to work in windows so that they can be kept under constant watch, surveyed by tourists, ogled by punters, monitored by pimps.

Migration from outside has made the problem worse.  A large number of these women have been trafficked illegally to begin with.  Once caught in the game they have no choice but to play the game. Reporting abuse to the authorities might easily result in eventual deportation.

I use the word ‘pimp’ but officially there are no ‘pimps.’  After all, the whole sordid business is just a business.  Instead of pimps there are ‘managers’ or ‘facilitators.’  I expect it was the ‘managers’ and ‘facilitators’ I saw in friendly groups by night, one of whom attempted to accost me.  As I say, I’m glad I was not alone.

“People are starting to hear that our system has a lot of crime and violence against the working girls linked to it”, said one of the beat policemen in the area, “The trafficking problem and the Turkish loverboys, they are all coming to the surface now.  Really we have allowed it by being too adventurous with allowing prostitution to be such an attraction in our city.”

Here is a case where Liberality has had exactly the same effect as Prohibition: in tackling one set of problems it has engendered others, worse in ever degree.  Human trafficking, drug trafficking and money laundering are all in place.  I bet that’s something not touched upon on the delightful meat tours, free to under threes.

The boy has put his finger in the dyke.  To prevent a continuing flood of filth The Prostitution Framework Act will come into force in the New Year.  This includes a requirement that all of the working girls register with the authorities.  It also raises the minimum age for prostitution from eighteen to twenty-one.  Will it work?  It seems doubtful.  It seems more likely that the underage girls and the illegal immigrants will sink ever deeper into the dark of the night, shepherded away by the loverboys to even sadder levels of degradation.