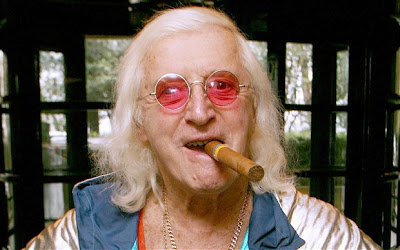 Please forgive the conceit but I was wise before the event.  I never liked the man; I always thought him creepy, not the sort of person I would want in the same room with me.  Paul Merton highlighted this once on Have I Got News For You, the comedy news quiz, when he drew a comparison between Savile and Norman Bates from the movie Psycho.  It was in the context of his unhealthy attitude towards his mother, whom he referred to as ‘the Duchess.’

I have a transcript from this show, one which never made it on to the telly screens.  It was recorded some years ago when Angus Deayton was the host.  Savile was the celebrity guest on Paul Merton’s team.  Allow me to give you a small sample from the opening;

During the headline round:
DEAYTON: You used to be a wrestler didn't you?
SAVILLE: I still am.
DEAYTON: Are you?
SAVILLE: I'm feared in every girls' school in the country.
(Audience laugh)
DEAYTON: Yeah, I've heard about that.
SAVILLE: What have you heard?
DEAYTON: I've...
MERTON: Something about a cunt with a rancid, pus-filled cock.
(Huge audience laugh; Awkward pause)
SAVILLE: I advise you to wash your mouth out, my friend...
MERTON: That's what she had to do! (Audience laughs)

Don’t get too excited.  It’s a hoax, dating back to 1999.  But it revealed a truth that dare not speak its name.  It was based on rumours about the man’s sexual conduct, rumours that now appear to have been based on fact.  I say appear because the matter is still sub judice, so to speak, a consideration the popular press has, in the usual style, put to one side.

I should add, for those not familiar with Savile and all his work, that he began his TV career as a DJ on a chart show called Top of the Pops. Latterly he hosted Jim’ll Fix It, in which he ‘fixed it’ for children to have their dreams come true.  It now seems he made their nightmares come true also.

There are so many aspects to this evolving story.  It touches on the semi-religious nature of modern celebrity, on the creation of false idols, on the sublimation of suspicions and on the attitude of a major public Corporation.  The Corporation, of course, is the BBC and the creepy Savile was their star.  It comes down, if you like, to a question of priorities.

Savile died last October.  In the usual manner the BBC scheduled a tribute, to be broadcast at Christmas.  Rather inconveniently the right hand did not appear to know what the left hand was doing, the left-hand in this case being Newsnight, a current affairs show.  While the glittering tribute was being assembled, Newsnight gathered the dirt.  As I’m sure you know – who could not know? – senior management allowed the cloying celebration to go ahead while binning the Newsnight exposé.

It came out.  These things can’t be hidden, and Savile is not around to threaten and silence with super injunctions.  The Great British Public, in true Mark Anthony style, has turned on their hero: they want to bury Savile, not to praise him.  Rather, they want to heap his memory in dead dogs.  But if Savile is a Frankenstein Monster – and of that I have not much personal doubt – he is their creation.  Always beware the passions of the multitude.

Scapegoats are being sought and the BBC has them aplenty.  Writing recently in the Spectator, John Simpson, the Corporation’s world news editor, says that the organisation made, in his words, a fearful mistake in not broadcasting the Savile exposé at the end of last year.

No, that’s wrong; the ‘fearful mistake’ was allowing the tribute show to go ahead, knowing full-well that questions were being raised about their star’s past conduct.  This looks to me like the worst kind of opportunism and hypocrisy, qualities that now seem typical of the BBC.

I return to Savile himself.  The celebrity of this talentless, fumbling and inarticulate poseur is a wonder and a mystery to behold.  I agree with Charles Moore - also writing in the Spectator - that Savile’s popularity was a symptom of a wider cultural sickness, an inability to probe below surfaces.  It’s rather nauseating to see the press in their daily demolition, when it did so much to build up this mediocrity in the first place.  A country that once marvelled to the wit of Oscar Wilde latterly marvelled to the inanities of Jim Fixing It.  Perhaps that’s the real scandal. 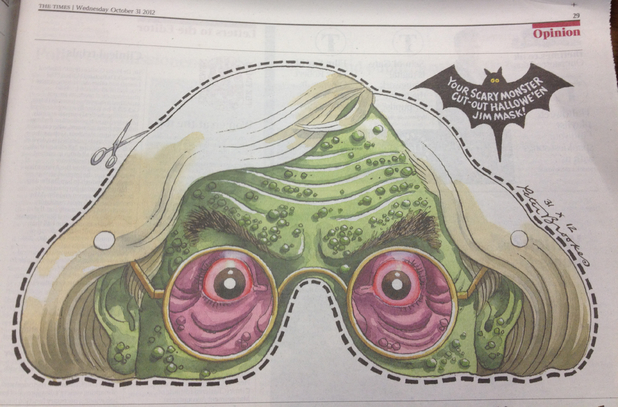